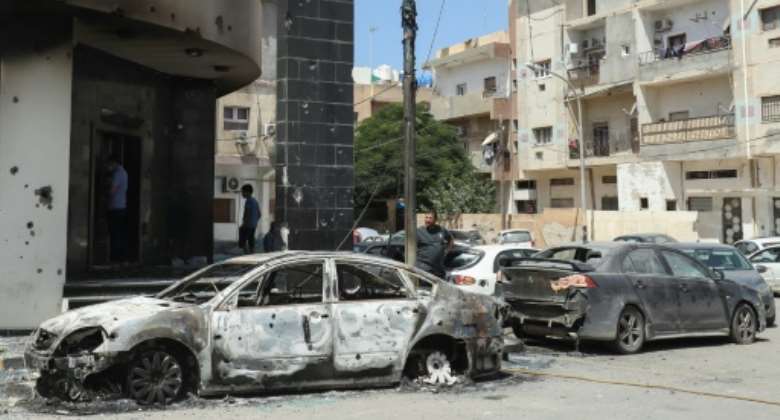 Armed groups had exchanged fire that damaged several hospitals and set buildings on fire starting overnight Friday into Saturday, the worst fighting in the Libyan capital since a landmark 2020 ceasefire. By Mahmud Turkia (AFP)

Libya's rival premiers on Sunday traded accusations over deadly clashes in Tripoli -- the worst in the capital since a landmark 2020 ceasefire and which sparked fears of a major new conflict.

The health ministry said 32 people were killed and 159 wounded during the fighting between rival armed groups which began overnight Friday and continued into Saturday, setting buildings on fire and damaging several hospitals.

The fighting came after months of mounting tensions between backers of Abdulhamid Dbeibah and Fathi Bashagha, whose administrations are vying for control of the oil-rich North African country.

Dbeibah, whose government was installed in Tripoli in the country's west as part of a United Nations-led peace process last year, accused his rivals of responding to "foreign agendas".

Local media and experts said Bashagha had failed in what was his second attempt to dislodge his rival from the capital in three months.

In a video address late Sunday, Dbeibah lashed out at "criminals" and "putschists" who "waged war on the capital with tanks and heavy weapons".

He vowed to "go after all those involved" and to relocate the headquarters of some armed groups outside the city centre.

Earlier, his rival Bashagha, who was appointed by Libya's eastern-based parliament this year, said Dbeibah, "his ruling family and his armed gangs" were "responsible for the blood that flowed" in Tripoli, accusing them of wanting to cling onto power "at any cost".

Bashagha, a former interior minister, is backed by powerful eastern military chief Khalifa Haftar, whose 2019 attempt to seize the capital by force turned into a year-long conflict.

Dbeibah has refused to cede power on the grounds that the next administration should be the product of elections.

Libya plunged into chaos following the 2011 overthrow and killing of dictator Moamer Kadhafi in a NATO-backed uprising, with myriad armed groups and foreign powers moving to fill the power vacuum.

A cautious calm had set in by Saturday evening. By Mahmud TURKIA (AFP)

A cautious calm had set in by Saturday evening, an AFP correspondent reported. Flights resumed and shops re-opened on Sunday.

During the fighting, rockets "were flying over our heads, in the middle of residential buildings," said resident Mohammed Abaya, 38.

"We were terrified," said another resident, retiree Lotfi Ben Rajab. "A rocket fell in my neighbour's living room but didn't explode, thank God".

Bashagha had initially ruled out the use of violence to take power in Tripoli but subsequently hinted that he could resort to force.

Certain armed groups, seen as neutral in the latest crisis, returned to support Dbeibah this weekend to push back Bashagha.

The public prosecutor on Sunday asked the head of passports to issue travel bans against Bashagha, some of his ministers and a former military intelligence official, according to a letter carried by local media.

Dbeibah said earlier Sunday he would create two committees to survey the damage from the fighting.

Dbeibah's Government of National Unity said fighting had broken out after negotiations to avoid bloodshed in Tripoli collapsed. Bashagha denied such talks had taken place.

The UN's Libya mission had called for "an immediate cessation of hostilities", deploring "indiscriminate medium and heavy shelling in civilian-populated neighbourhoods".

Local media reported late Saturday that a group of pro-Bashagha militias that had been making their way to the capital from Misrata later turned back.

The fighting prompted several airlines to cancel flights to and from the capital, but flights resumed and shops reopened on Sunday morning. Educational institutions said student exams would go ahead on Monday.

On Saturday evening, Dbeibah ordered the arrest of anyone involved in the "attack on Tripoli", both civilian and military.

A pro-GNU force from Misrata -- the hometown of both Dbeibah and Bashagha -- said Sunday it had arrested several "assailants".

But analysts said the crisis was far from resolved, with the capital controlled by a multitude of armed groups with shifting alliances.

The "groups that found themselves on the same side in yesterday's Tripoli fighting will tomorrow clash over turf, positions and budgets," analyst Wolfram Lacher said on Twitter.

"The factions that were pro-Dbeibah yesterday will challenge him tomorrow."