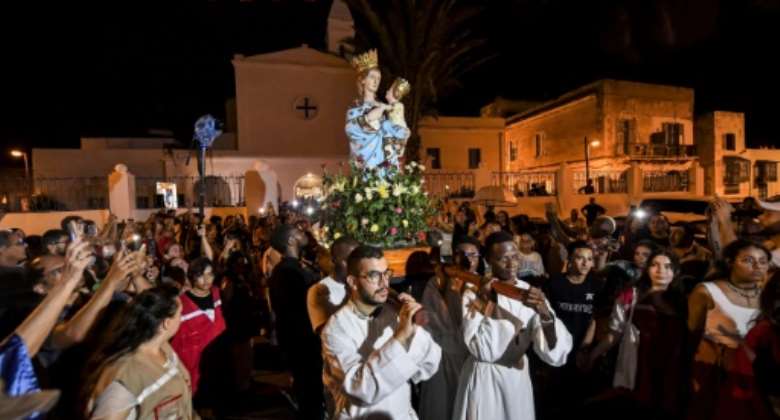 The Madonna of Trapani procession started after Tunisia's Muslim ruler Ahmed Bey -- whose mother was a Sardinian Christian -- gave a piece of land for building a church in 1848. By FETHI BELAID (AFP)

Worshippers crying "Hail Mary" walk alongside their Muslim neighbours in the Tunisian port district of La Goulette, harking back to a time when Sicilians were at the heart of neighbourhood life.

The Madonna of Trapani procession, marking the Catholic Feast of the Assumption, is an echo of a "forgotten history" researchers of Italian origin say offers a model for coexistence with migrants, among faiths and ethnicities.

The annual procession was born in the mid-19th century when La Goulette was home to tens of thousands of Sicilians, as well as Sephardic Jews, Maltese, Greeks and Spaniards.

"They shared each other's celebrations and sadnesses, and took part in each other's events", said Silvia Finzi, editor of Italian-language Tunisian newspaper Corriere di Tunisi -- one of some 120 Italian publications founded between 1838 and 1956, the year Tunisia gained independence from France.

There were some red lines -- for example, there were few marriages across religious divides.

But for centuries, Tunisia has been able to peacefully host a mosaic of migrant communities "without forcing them to forget their roots", Finzi said.

The Madonna of Trapani procession was started by a Sicilian fishermen from La Goulette to mark the Feast of the Assumption and pray for a good catch and protection at sea. By FETHI BELAID (AFP)

The Madonna of Trapani procession started after Tunisia's Muslim ruler Ahmed Bey -- whose mother was a Sardinian Christian -- gave a piece of land for the building of a church in 1848.

It was Sicilian fishermen from La Goulette, a port district on the edge of Tunis, who started the annual procession from the church to the sea to mark the Feast of the Assumption on August 15 and pray for a good catch and protection on the high seas.

The mariners lived among Muslims and Jews in a part of La Goulette nicknamed "Little Sicily".

Trapani is a city in the northwest of the Italian island.

The procession was suspended in 1964 following Tunisia's independence from France, but was relaunched in 2017.

This year it attracted hundreds of Christians, Muslims and the mayors of Tunis and La Goulette.

The Catholic Archbishop of Tunis, Ilario Antoniazzi, said such a procession would be "impossible" in other parts of the Maghreb region.

Archbishop of the Catholic Archdiocese of Tunis Ilario Antoniazzi said such a procession would be 'impossible' in other parts of the Maghreb region. By Fethi Belaid (AFP)

The 74-year-old, who has spent some 50 years in the region, said Muslim-majority Tunisia's "respect" for those of other faiths is "an example for many Arab countries".

That is partly due to the long history of Sicilians in La Goulette, just 220 kilometres (135 miles) from the Italian territory, the Mediterranean's biggest island.

Alfonso Campisi, a professor of Italian civilisation descended from Sicilian settlers, has spent two decades researching the "forgotten history" of some 130,000 Italians in the North African country, mostly Sicilians.

He wrote a book and produced a documentary to "give a voice" to those who have continued to live in La Goulette.

His film on the "Sicilians of Africa", which was shown in France, Italy and Tunis this summer, also examines the fate of those who left after independence and ended up in refugee camps in northern Italy.

Rresearchers of Italian origin say the procession is an echo of a 'forgotten history' that offers a model for coexistence with migrants of various faiths and ethnicities. By FETHI BELAID (AFP)

Italians had headed to Tunisia in waves over the 19th and 20th century, and they were to leave a lasting mark on Tunisian architecture, cuisine (lots of pasta plates) and even the local dialect of Arabic.

Many were craft workers, masons, mechanics or farm workers who fled Italy to escape poverty or Cosa Nostra, the Sicilian mafia.

Most left Tunisia after independence, when Tunisians were given priority in public jobs and land ownership.

Nadia Naji, a Tunisian lecturer in Italian, said that Tunisians themselves "don't know this period of history, there is a missing link".

Italian heritage is everywhere from the colonial-era buildings of Tunis to words that have infiltrated the local dialect of Arabic -- such as the names of fish (triglia for red mullet) and expressions such as "d'accordo" (OK).

Italians headed to Tunisia in waves over the 19th and 20th century, leaving a lasting mark on Tunisian architecture, cuisine and even the local dialect of Arabic. By FETHI BELAID (AFP)

"My grandparents used to tell me about their Jewish, Italian and Sicilian friends," said Atef Chedli, a radiologist aged 65, after seeing Campisi's documentary.

"It wasn't 'Tunisians and the others'. The Jews were very well integrated, so were the Italians and the Maltese."

Under French rule from 1881 to 1956, "Italians were close to the Tunisian population (partly) because they had the same inferior status" and because of a shared, Mediterranean culture, Finzi said.

Both Campisi and Finzi think this Tunisian model can serve as an example nowadays for integration of migrants in Italy, France and in the rest of the world.

Tunisia "was able to welcome a mass of poor people, from Sicily but also from Greece, Corsica and Spain," said Campisi.

Those who remember that period, Tunisian Sicilians and Tunisians, have a mix "of nostalgia and a desire for Tunisia to remain an open and tolerant country" that welcomes migrants, Finzi added.

We haven’t rejected Justices Gaewu and Koomson – Appointment...
15 minutes ago

Stop the wrongful, multiple sale of lands — Akufo-Addo to ch...
15 minutes ago