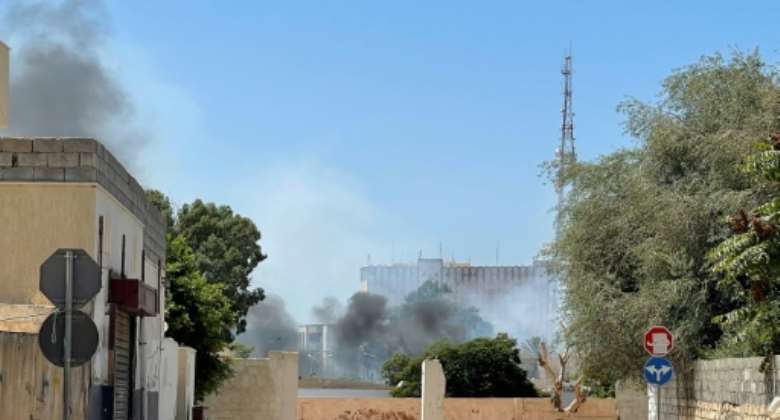 Small arms fire and explosions rocked several districts of the capital overnight and into Saturday. By Mahmud TURKIA (AFP)

Clashes between backers of Libya's rival governments killed at least 23 people and damaged six hospitals in Tripoli on Saturday, sparking fears that a political crisis could spiral into a major new armed conflict.

Small arms fire and explosions rocked several districts of the capital overnight and into Saturday, when smoke could be seen rising from damaged buildings.

But cautious calm appeared to have returned on Saturday night, an AFP correspondent said.

The head of the government in Tripoli, Abdulhamid Dbeibah, posted a video of himself surrounded by bodyguards and greeting fighters supporting him.

In an updated toll, the health ministry in Tripoli said 23 people had been killed and 140 wounded in the fighting.

The two rival administrations vying for control of the North African country and its vast oil resources -- one based in the capital, the other approved by a parliament in the country's east -- exchanged blame.

The US ambassador to Libya, Richard Norland, said in a statement that Washington "condemns" the surge in violence, urging an "immediate ceasefire and UN-facilitated talks between the conflicting parties".

Dbeibah's Government of National Unity said fighting had broken out after negotiations to avoid bloodshed in the western city collapsed.

Six hospitals were hit and ambulances could not reach areas affected by the clashes, the ministry said earlier. By Mahmud TURKIA (AFP)

Local media reported later Saturday that a group of pro-Bashagha militias that had been making their way to the capital from Misrata had turned back.

In July, clashes between rival groups in Tripoli left 16 people dead, including a child.