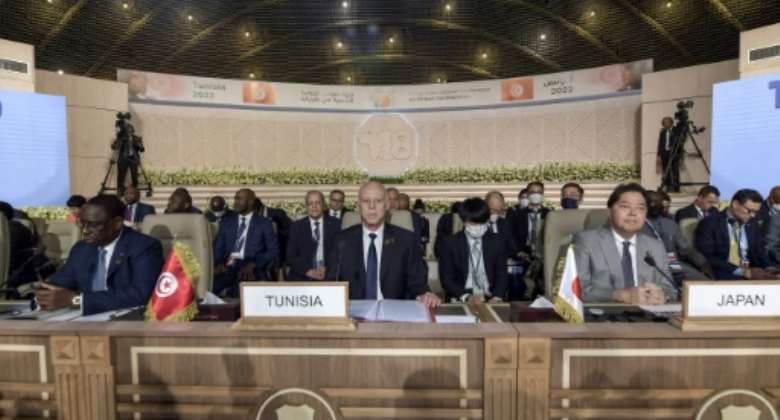 The eighth Tokyo International Conference on African Development (TICAD8) takes place amid a "complex" international environment caused by the coronavirus pandemic and the war in Ukraine, the Japanese foreign ministry said.

Host country Tunisia is among the countries bearing the brunt of global supply chain disruptions and price spikes unleashed by these two factors, since it is heavily import dependent and is not an energy player.

In his opening speech, Tunisian President Kais Saied urged delegates to "search together for ways for African peoples to achieve the hopes and dreams of the first generation after independence".

Praising Japan's strong track record of development and "preserving" its culture, he said that "the world cannot continue as it was. With all its wealth and assets, Africa cannot watch its people live through poverty."

Kishida, speaking over live video from Tokyo after testing positive for Covid-19 days earlier, pledged that "Japan will invest both public and private funds worth $30 billion over the next three years" across Africa.

"To improve the lives of Africans, we will provide up to $5 billion in co-financing with the African Development Bank," he said.

The pledge come as China cements its influence on the continent with its "Belt and Road" infrastructure initiative, and as experts express concern about the long-term sustainability of some African nations' borrowing from Beijing.

Japan's initiative "includes up to $1 billion in a new special quota to be established by Japan to promote debt consolidation reforms" in Africa, the Japanese premier said.

He also pledged $300 million in co-financing with the African Development Bank to boost food production, vowing to help African countries weather grain shortages caused by the war in Ukraine, a major wheat producer.

He also urged a suspension of interest on debt owed to G20 countries, calling for a seat for the continent at the next G20 summit.

On the eve of TICAD, Morocco withdrew from the event and recalled its ambassador from Tunisia for consultations, after Saied hosted the head of Western Sahara's Polisario secessionist movement.

Tunis in turn said it would recall its own ambassador from Rabat, pointing to its "total neutrality" on Western Sahara, a territory Rabat sees as an integral part of Morocco.

Sall said he "regrets Morocco's absence", expressing hopes for a solution to the disagreement.

It is the first TICAD -- held every three years either in Japan or an African country -- since the coronavirus pandemic began.

The Japanese delegation is led by Foreign Minister Yoshimasa Hayashi, with about 5,000 participants set to attend.

Among those are 48 representatives of African countries, including at least 20 heads of state or government, according to Tunisian diplomatic sources.

But no journalists from African news outlets were given access to delegates ahead of the event, except Tunisian state media, alongside Japanese journalists.

The conference has sparked anger among Tunisians as major road closures threatened traffic disruptions in the capital.

Authorities spruced up parts of the city likely to be seen by delegates and dug in roadside plants, but these efforts also drew ire from social media users.

"I feel deeply insulted by the clean-up of Tunis for the TICAD," one Tunisian wrote on Twitter, arguing that "those we pay to make our lives easier" should instead focus on making the capital livable for citizens all year round.