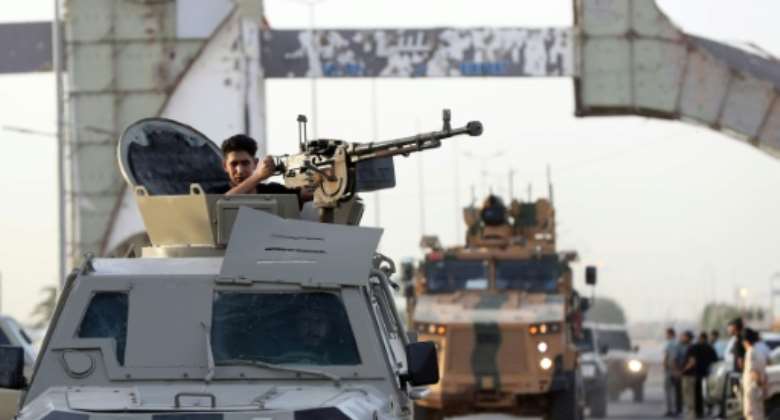 With combat continuing, "we are having difficulties moving around", Oussama Ali, spokesman for the Tripoli ambulance service, said on Libya's Al-Ahrar television.

He said there were "injured among civilians", but did not give a number.

Local media reported fatalities but no official toll had been released.

Numerous images on social media purported to show cars burnt-out in the fighting and bullet-riddled buildings.

The fighting broke out in various districts of Tripoli between groups armed with both heavy and light weapons, as two rival governments yet again vie for power in the oil-rich but impoverished North African country.

Youths play basketball on an outdoor court in the Libyan capital Tripoli, before fighting erupted. By Mahmud TURKIA (AFP)

Gunshots and explosions rang through the darkened streets of Tripoli throughout Friday night, an AFP correspondent said.

The crisis pits groups that back the Tripoli-based Government of National Unity (GNU), led by Abdulhamid Dbeibah, against supporters of a rival government led by former interior minister Fathi Bashagha.

According to local media, two influential armed groups faced off against one another in Tripoli, where divisions have deepened among militias on opposing sides of the political divide.

Bashagha was appointed in February by a parliament elected in 2014 and based in the eastern city of Tobruk, but has since been unable to impose his authority in Tripoli.

Initially ruling out the use of force, the former minister has since hinted that he could resort to armed force.

Bashagha is supported by eastern-based military strongman Khalifa Haftar, who launched an unsuccessful offensive on the capital between 2019 and 2020.

Dbeibah -- appointed last year as part of a United Nations-backed peace process to end more than a decade of violence in the country -- has refused to hand over power before elections.

The UN on Tuesday voiced "deep concern" over growing tensions between the rival Libyan forces, calling for "immediate" moves to calm the situation.

Last month, the most deadly clashes between rival groups in Tripoli since 2020 left 16 people dead, including a child.