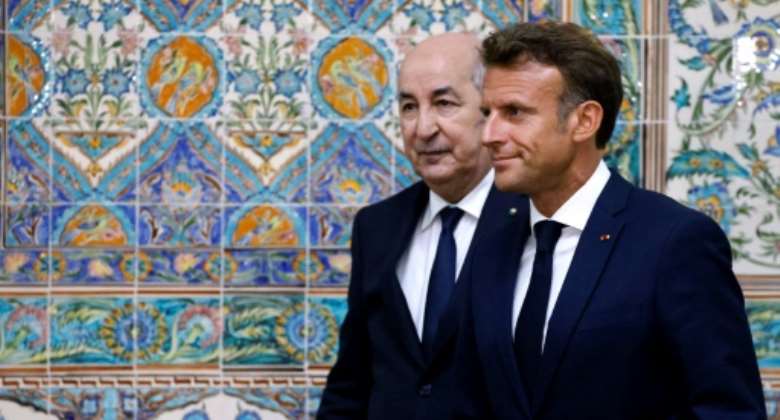 French President Emmanuel Macron (R) and Algeria's President Abdelmadjid Tebboune (L) leave at the end of a joint press conference at the presidential palace in Algiers on August 25, 2022. By Ludovic MARIN (AFP)

French President Emmanuel Macron paid his respects at a European cemetery in Algeria on Friday, the second day of a visit aimed at turning a "new page" in often difficult ties.

The three-day trip comes after months of tensions between France and its former North African colony, which earlier this year marked 60 years of independence following 132 years of French rule.

Accompanied by French military officials, Macron on Friday laid a wreath at a monument to those who "died for France", in the mixed Christian-Jewish Saint Eugene cemetery which was the main burial ground in colonial times.

French soldiers sang the Marseillaise as cicadas buzzed in the background.

He later visited the Jewish part of the cemetery, accompanied by prominent French Jews.

Later in the day he is set to meet young Algerian entrepreneurs and discuss creating a French-Algerian incubator for digital start-ups, as part of a visit his office says aims to "rebuild and develop" relations with a view to the future.

The Algerian capital Algiers is pictured from the harbour. By Ludovic MARIN (AFP)

Algerian President Abdelmadjid Tebboune had on Thursday hailed "promising prospects for improving the special partnership" between the two countries.

During their joint press conference on Thursday evening, Macron -- the first French president to be born since Algerian independence in 1962 -- said that "we didn't the choose the past, we inherited it".

"We must look at it and recognise it, but we have a responsibility to build our future for ourselves and our youth," he said.

Ties between Paris and Algiers have seen repeated crises over the years.

They had been particularly tense since last year when Macron questioned Algeria's existence as a nation before the French occupation and accused the government of fomenting "hatred towards France".

Tebboune withdrew his country's ambassador in response and banned French military aircraft from its airspace.

Macron is to visit the Grand Mosque of Algiers. By Ludovic MARIN (AFP)

But Macron's office said he "regretted" the misunderstandings caused by his comments, and his aides believe both sides have moved on, noting the resumption of normal diplomatic relations and overflights to French army bases in sub-Saharan Africa.

The French president announced Thursday evening that the two countries would set up a joint French-Algerian commission of historians to study archives on France's colonial rule in Algeria. This would include the devastating eight-year independence war which left hundreds of thousands, mostly Algerians, dead.

Analysts say Macron's visit comes as Algeria is seeking a bigger role in the region, buoyed by surging energy prices that have filled the coffers of Africa's top natural gas exporter.

Macron's office has said gas is not a major feature of the visit -- although the head of French energy firm Engie, Catherine MacGregor, is in Macron's delegation.

Energy expert Geoff Porter of North Africa Risk Consulting wrote that Macron's trip had at least two aims: "feeling out Algeria's energy sector stability and potential additional export capacity... and trying to woo Algiers away from some of its other diplomatic relationships" including Russia and China.

Tebboune said Thursday the two men had discussed how to bring stability to Libya, the Sahel region and the disputed territory of Western Sahara.

On Friday he is also set to visit the iconic Grand Mosque of Algiers before heading to second city Oran for a stop focused on the arts.