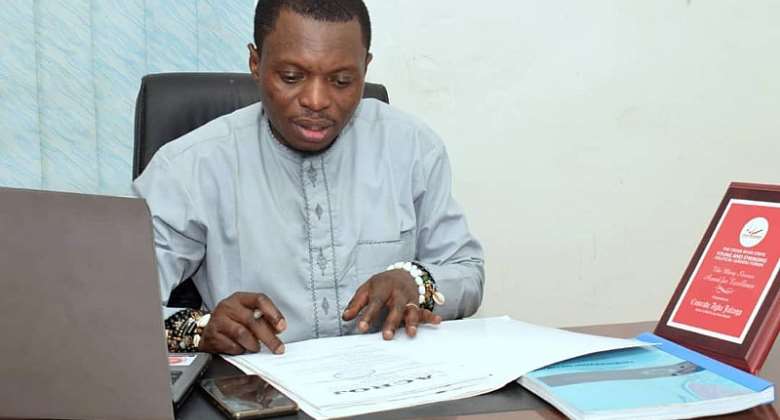 Nigerian authorities should drop all investigations into publisher Agba Jalingo, compensate him for his previous unlawful detention, and stop harassing the journalist, the Committee to Protect Journalist said Thursday.

Officers detained Jalingo at a police station close to his home, and then transferred him to Ikeja, the capital of Lagos state, where he was held until about 11 a.m. on August 20; then, officers flew Jalingo to a police station in the Federal Capital Territory, a federally administered region of Abuja, the capital, the journalist told CPJ.

Jalingo’s arrest was in response to a defamation and cyberattack complaint filed on behalf of Elizabeth Alami Frank Ayade, sister-in-law of Lagos state Governor Benedict Ayade, according to Jalingo, Jonathan, and a copy of that complaint reviewed by CPJ.

Authorities released Jalingo on bail at about 10 p.m. on August 20, and ordered him to meet Elizabeth Ayade when called by police to discuss the issue on August 22; Jalingo returned to the police station on that date but Ayade was not there, and officers said they would summon him again, according to CrossRiverWatch and Omoyele Sowore, the publisher of the privately owned Sahara Reporters news website and a 2023 presidential candidate with the African Action Congress political party of which Jalingo is a member, who spoke to CPJ in a phone interview.

“Nigerian authorities should immediately drop their defamation and cyberattack investigations into publisher Agba Jalingo and stop harassing the journalist, who has been repeatedly targeted because of his work and is already owed considerable court-sanctioned damages for his protracted arrest in 2019,” said Angela Quintal, CPJ’s Africa program coordinator, in New York. “Instead of wasting resources yet again on attempts to criminalize Jalingo’s journalism, authorities should ensure that any such complaints are handled through alternative dispute resolution mechanisms.”

The defamation and cyberattack complaint against Jalingo was filed on July 6 and signed by Uyi Frank Obayagbona, a lawyer representing Elizabeth Ayade, according to Jonathan. The complaint, which was delivered to CrossRiverWatch’s office on August 15, cited an unspecified Facebook post by Jalingo and a June 30 report by CrossRiverWatch, Jonathan said.

That report alleged that Elizabeth Ayade had hired a lecturer to impersonate her to take an exam at the Nigerian Law School in Abuja; the article included Ayade’s denial of those allegations.

The complaint accused Jalingo of defaming Elizabeth Ayade and her family, and asked the website to retract that article within two weeks, pay damages of 500 million naira (US$1,187) to the complainant, or face litigation.

Obayagbona told CPJ by phone that the cyberattack allegations related to Section 24 of Nigeria’s Cybercrime Act. That section imposes prison terms of up to three years and fines of up to 7 million naira (US$2,951) for those convicted of “knowingly or intentionally” sending a message “he knows to be false” and which is grossly offensive, causes annoyance or danger, or constitutes criminal intimidation.

Obayagbona said his client would also bring a civil lawsuit against Jalingo.

An Abuja police spokesperson, Josephine Adeh, declined to comment on the specifics of the investigation, but said Jalingo was arrested and detained because he failed to reply to repeated invitations by police to appear for questioning.

Jalingo told CPJ that neither he nor his office had received any police invitations for questioning.

In August 2019, authorities arrested and detained Jalingo on defamation and anti-state charges over his writings and social media posts about Governor Ayade.

Authorities later charged Jalingo with cybercrime , but dropped the charges after a regional court ordered that Jalingo be compensated for his protracted detention. Jalingo told CPJ that authorities had not paid that compensation.