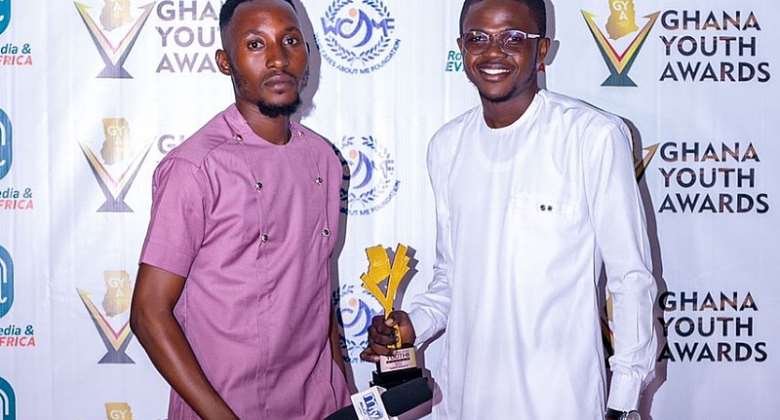 Abubakar Sadick Iddrisu, the Central Regional President of National Service Personnel Association and the General Secretary for the National Chapter has emerged the winner of the Youth in Politics category at this year's Ghana Youth Awards.

In a keenly contested category of five nominees, Mr. Sadick Iddrisu was crowned the winner.

He said he honestly wasn't expectant of the award but hard work and service to humanity made it possible.

Speaking to this reporter today, Thursday 25th August, 2022 he shared that he was amazed to have won such an award and very humbled as well.

According to him, he saw the advert online and decided to apply. "I filled the forms and added all that I've done in politics within the year under review. I submitted and forgot about it".

He added that he was only called to grace the ceremony since he has been picked as a nominee and to his utmost amazement, he was pronounced as the winner.

When asked what in his estimation made him win, he intimated that, he was the UCC TESCON NASARA Coordinator for 2021/2022 academic year. "Currently the Central Regional National Service Personnel Association ((NASPA) president and the General Secretary for NASPA Ghana. I think these contributions made me win".

In answering how he feels about the award, the NASPA General Secretary underscored that "This would propel me to do more. I only entered this competition for myself and never knew I was being watched. Winning is an indication that service to humanity is something worthwhile. With my current position in NASPA, I'll do well to serve better".

The Ghana Youth Awards event is an initiative by Who Cares About Me Foundation and Roheen Media & Events-Africa. It aims at celebrating and honouring outstanding Ghanaian youth, who epitomize the qualities of entrepreneurship, leadership, social responsibility and national development.

We haven’t rejected Justices Gaewu and Koomson – Appointment...
43 minutes ago

Stop the wrongful, multiple sale of lands — Akufo-Addo to ch...
43 minutes ago