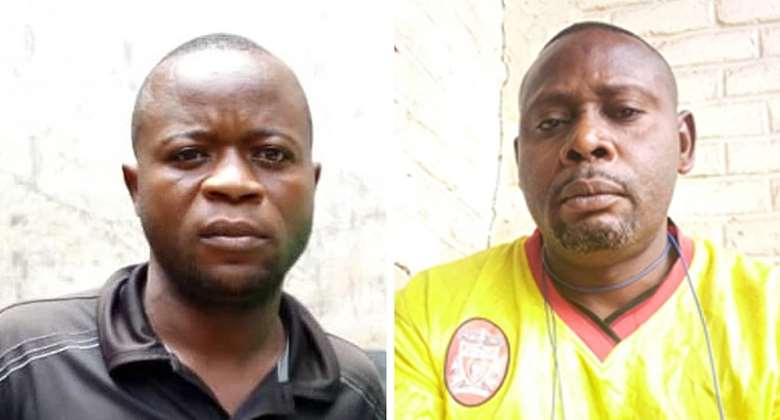 Congolese journalists Christian Bofaya (left, credit withheld) and Patrick Lola (right, photo by the journalist) were recently unable to pay the bail for their release from custody.

Authorities in the Democratic Republic of the Congo should drop all legal proceedings against journalists Patrick Lola and Christian Bofaya after they spent more than eight months in arbitrary detention, and should not use excessive bail to keep journalists imprisoned, the Committee to Protect Journalists said Wednesday.

Lola, a freelance reporter, and Bofaya, a reporter for the privately owned broadcaster E Radio, were arrested in Mbandaka , the capital of Equateur province, on January 10 for allegedly disturbing the peace while covering a political protest.

On August 19, the Court of Cassation in the capital, Kinshasa, set the bail for Lola, Bofaya, and three organizers of those protests at 2 million Congolese francs (US$1,000) each, according to news reports , court documents reviewed by CPJ, and Jean-Claude Mafundisho, a lawyer representing both journalists, who spoke to CPJ in a phone interview.

The protest organizers paid the bail and were released, but the journalists were unable to pay and remained in detention, according to those sources.

After the court decision, demonstrations broke out at Mbandaka Central Prison, where the defendants had been held, Mafundisho told CPJ, saying that Bofaya escaped from prison during authorities’ crackdown on the inmates and was not in detention as of Wednesday.

“After Congolese journalists Patrick Lola and Christian Bofaya spent more than eight months in prison without charge, refusing to release them because they cannot afford to pay an excessive amount in bail is a colossal travesty of justice,” said Angela Quintal, CPJ’s Africa program coordinator, in New York. “Authorities must drop their investigation into the two journalists, ensure that not only those who can afford to post bail have a chance at justice, and show that the courts can right the terrible wrong of Lola and Bofaya’s prolonged detention.”

Mafundisho told CPJ he would rather authorities grant the journalists bail or transfer their case to the Mbandaka court for oral arguments.

CPJ called the three protest organizers, Congolese government spokesperson and Minister of Communications Patrick Muyaya, and Justice Ministry deputy chief of staff Pélagie Ebeka for comment, but no one answered.