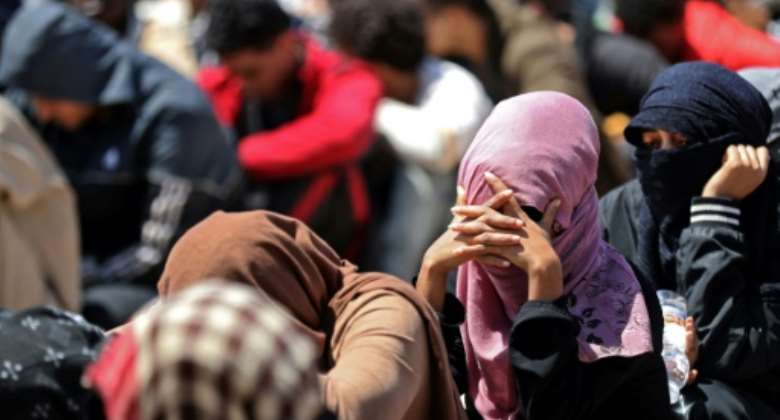 Migrants intercepted by the Libyan coast guard as they attempted to reach are held in a detention camp in Surman, west of the capital Tripoli, pending possible deportation. By Mahmud Turkia (AFP)

Godwin risked everything for a better life in Europe, but he was detained and ransomed in Libya by European Union-backed authorities accused of "extreme abuse" against captured migrants.

The 34-year-old Nigerian had paid 1,100 euros ($1,100) for a place on an overcrowded vessel from the Libyan port of Zawiya, heading for Italian shores via the world's deadliest migration route.

"It was night when I got on the boat, it was already dark. I didn't know (where we were going)," he said, giving only his first name. "I just wanted to go to Europe and have a good life."

Those hopes were dashed when a Libyan patrol boat approached.

Godwin said he was so reluctant to avoid going back to Libya that he considered throwing himself into the sea.

But he was detained and dragged back to Libya, where he was only released after his family paid a 550 euro ransom.

His is far from the only case.

Human Rights Watch says migrants intercepted by the Libyan coast guard are "hauled back to arbitrary detention and abuse" and EU governments are turning a blind eye. By Mahmud Turkia (AFP)

Earlier this month, Human Rights Watch said some 32,450 people had been intercepted by Libyan forces last year and "hauled back to arbitrary detention and abuse" in the war-ravaged country as European countries turned a blind eye.

HRW accused the EU's border agency Frontex of using a drone to provide information that "facilitates interceptions and returns to Libya ... (despite) overwhelming evidence of torture and exploitation of migrants and refugees".

The migrant-run @RefugeesinLibya Twitter account regularly posts images of refugees allegedly killed by Libyan forces or tortured to extort money from their families.

Refugees in the country are "tortured by European taxpayers' money, dehumanised and deprived in all forms," it said in a recent tweet.

That chimes with a report in October by United Nations experts, who said acts of "murder, enslavement, torture, imprisonment (and) rape" against detained migrants in Libya may amount to crimes against humanity.

The Libyan coast guard has intercepted almost 13,000 migrants so far this year with financial support from EU countries eager to keep them out. By Mahmud Turkia (AFP)

None of this has stopped the European Union funding and working closely with the Libyan coast guard to prevent migrants reaching northern Mediterranean shores.

The accusations against Europe are not limited to financial support.

Alarm Phone, a group running a hotline for migrants needing rescue, this month accused Malta of failing to launch operations to rescue migrants in danger, "despite their obligations to do so" under international law.

"Alarm Phone has witnessed this non-assistance policy in action innumerable times," it said, accusing Malta of "abandoning boats at risk of capsizing" within the island's search and rescue zone.

From the start of January until August 20, almost 13,000 migrants have been intercepted and dragged back to detention in Libya while trying to cross the Mediterranean, according to the International Organization for Migration (IOM).

Some migrants are repatriated, others kept in detention camps, while some are simply allowed to leave to alleviate chronic overcrowding. By Mahmud TURKIA (AFP)

Some have been detained, while others have been sent home or simply allowed to leave the overcrowded detention centres.

A further 918 were either dead or missing.

"The arrests are carried out according to the rules in place," a migration official said.

But many argue that the long years of lawlessness since a NATO-backed revolt toppled and killed longtime dictator Moamer Kadhafi in 2011 has left the country prey to armed groups and people traffickers.

"Human rights? There are no human rights in Libya," said Hussein, another migrant stuck in Tripoli.

The 26-year-old from Sudan said he had tried to reach Europe on an overnight boat crossing in 2017.

"The Libyan coast guard caught us and sent us back," he said.

He was detained for a day before managing to escape, he said.

Migrants from sub-Saharan Africa take what work they can get in Libya, desperate to scrape together the money for their next attempt to reach Europe. By Mahmud Turkia (AFP)

He called on African countries to "look after their people" and discourage them from leaving, "instead of European countries funding Libya to stop migration".

But despite the risks, both Godwin and Hussein said they were saving money for a new effort to reach Europe.

They spoke to AFP while waiting on the roadside in the hope of picking up some work for the day -- for a pittance.

"Now I'm just in Libya, suffering, there is no work, no food to eat, nothing," said Godwin, wearing a paint-specked t-shirt and a grey beanie.