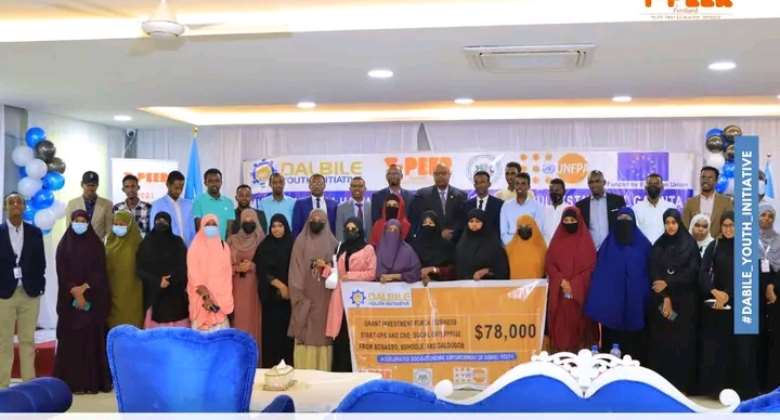 On 21 August in Garoowe, I have attended an event organized by Y-Peer and UNFPA for 34 startups award ceremony that were selected from three cities of Puntland region under the project of Dalbile youth initiative funded by the European Union’s Inclusive and Local Economic Development (ILED). This program is designed to empower and provide young people skills they can utilise in the job market and grant award to fund startups with good business ideas.

The intiative led by the UNFPA in Somalia have been impelemented in partnership with local hubs that specialize in the sector. In the capital and central regions of the country, Irise hub has been in charge. While around puntland and Somaliland regional states Y-peer and Shaqadoon are the local partners for the project.

According to experts, such initiatives have helped young people gain different skills in life and digital literacy. It even inspired other organisations to adopt the same model to acceralate youth development. Among those is BINA Somalia chapter that had designed the same model known as "Hiigsi competetion".

It can be well argued that under these programs, most of the young people receive skills they never had before, and it had been great intiative but the overall objective of the program including grants or "free money" for startups have been criticised by experts claiming it has severe downsides in the market.

"Grants for small businesses destroy the market. Because of the free money that rolls in without obligation/conditions, these money are misused for other means". Said Abdirizak Said(Phd) in a speech at Garowe micro-finance fair.

According to a young man who was recipient of Dalbile Fund in 2021 at Boosaso claimed because of the the capital his business required and the grant he received which cannot cover the required capital made his business not yield the desired outcome. He even further argued they submitted made up report to satisfy the evaluators.

"When we were asked for business plan, we were given certain criteria to base our idea like certain amount of budget, even if our business costs more than that, which led us to write as they wish and not consider the sustainability of our idea, we ended up with little amount of money that doesn't meet the capital for our business idea, and they got made-up report that indicates the success of our business". Said Mohamed Osman

According to Mohamed, it can be well argued that the facilitators of the program have put enormous pressure on startups when it comes to the capital their business require without putting much consideration for the long term in order to meet the set criteria amount for startups. It's but unclear whether donors set the exact amount/capital for each startup company. In other words, some believe project managers were just discharging their duties as expected by their superiors, without considering sustainability outcome.

Furthermore, many young people we interviewed who have been recipient of same type of project that Save the children in Puntland is implementing under EASE-Y program funded by GIZ, have claimed they prefer to divide the money per individual than setting up the business idea they pitched and qualified for. As a result, that led the organisation to back up from distributing the funds untill the recipient comes up with guarantee individual that will be held accountable in case, they use the funds for other means.

"We are not ready for business. We want to share/divide the money per individually. Either save the children does that or we boycott the project" -said one recipient of EASE-Y project by the save the children in puntland.

Thus, the decision of the Save the children in Puntland to back up till guarantee is found for the funds start ups are expected to receive is reasonable and justify how young people mostly use those funds which can be attributed to misuse for other means.

The Way Forward: Credit or Equity Financing
One thing is then certain, giving out these free grant money for startups is catastrophic. Since such grant is most often used by high growth startups, businesses that will scale rapidly or which have large potential customer base, but to give grant for small startups, It's not making them be prepared to operate business succesfully. Each youth in the country sees this as free money because of the stories told by previous recipients like how they got away with taking the money and not implementing their business.

The problem, however can be partly attributed to those implementing the program, because of their lack of commitment to put in place monitoring policies for any funded startup and also it's been noticed few mangers for the program make pitch selection based on nepotism and favoritism either by collecting commission from the funds each startup receieves or rewarding a close relative/family or friend.

However, the blame also extends to the overall program directors and of those of the donors because of their labelling that feasible business idea can succeed if it gets grant. This form of funds must be tied with strict conditions that empowers startups stay more committed to succeed.

International donors need to try out Credit and equity financing as other means to fund startups. Developing successful startup companies requires broader terms but with the model of grants or "free money", it'd most likely not acheive the desired outcome.

About the author
Jibriil Mohamed is certified business mentor by Ilm UK, CEO of J.D. consultancy, a company that provides consulting service for MSMES and large companies through research, and capacity building. He can be reached at [email protected]