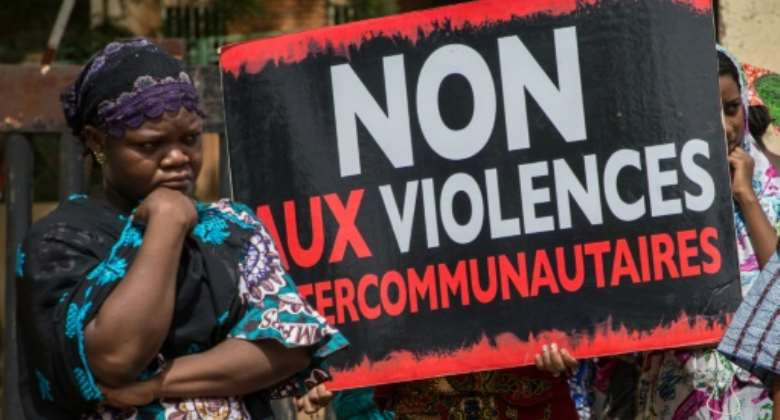 Women hold a sign reading 'No to intercommunity violence' after Fulani villagers in northern Burkina Faso were massacred in 2019 reprisal for a jihadist attack. By OLYMPIA DE MAISMONT (AFP)

Jihadist attacks in Burkina Faso have inflamed accusations against the Fulani community, sparking warnings the troubled country may spiral into ethnic conflict -- even civil war.

The impoverished Sahel state is battling a seven-year-old jihadist insurgency that has claimed thousands of lives and prompted nearly two million to flee their homes.

The jihadists have drawn some of their recruits from the Fulani minority, causing the group as a whole to be stigmatised, say specialists.

It likened the posts to Radio Mille Collines -- a notorious radio station in Rwanda that in 1994 urged its Hutu listeners to slaughter "Tuti cockroaches."

The country had to act "firmly and resolutely" against "speech that is hateful, subversive, dangerous and unacceptable in a country as rich and diversified as Burkina Faso," he said.

The Fulani, also known as Peul, account for around 1.5 million out of Burkina Faso's 20.5 million people.

They have been singled out in the past for association with jihadist massacres.

On January 1, 2019, unidentified assailants attacked the village of Yirgou in northern Burkina Faso, killing six people, including the village elder.

The attack triggered instant reprisals against Fulani that led to 50 deaths, according to the official toll, while civil society groups say fatalities numbered at least 146.

Three months later, at least 116 unarmed men, accused of supporting or housing Islamists, were believed to have been killed by the security forces in the village of Arbinda, Human Rights Watch (HRW) said.

"With few exceptions, the victims were members of the Fulani ethnicity," it said, after sending investigators to the location.

Other massacres in 2020 in the villages Dinguila and Barga left dozens of dead, most of them also Fulani.

Last month a man was arrested for allegedly distributing an audio message directed at two Fulani traditional and religious leaders.

"Your community is behind the insecurity which is rampant in our country," it said.

"Out of the 60 ethnic groups (in Burkina Faso), yours is the one which is behind the massacres."

First published in 2018 and updated in May, the list comprised pictures of 136 individuals, 120 of whom were of Fulani origin.

Many Fulani have a background as semi-nomadic herders -- a status that often leads to marginalisation and friction with sedentary farmers. By Issouf SANOGO (AFP)

"People quickly put two and two together and likened the Fulani to terrorists, even though 90 percent of Fulani have nothing to do with terrorism," said Traore.

"All this is symptomatic of deep social divisions which have been exacerbated by terrorism," he said.

"Today, they constitute a serious threat to the very survival of the country, which every day is on the brink of chaos."

Another commentator, Lassina Ouedraogo, said the "Fulani-are-terrorists" trope was completely disproven by the facts.

"This community is paying the highest price," he said.

"In virtually every place they go, they are shunned or even chased away, accused of being accomplices."

Community violence flared in central Mali after the jihadists moved into the ethnically-mixed region in 2015.

He called on politicians, religious and traditional leaders and intellectuals "to go out and talk to people, work hard to encourage cohesion and community life, which are what hold our nation together."

Barry served under former president Roch Marc Christian Kabore, who was overthrown in January by colonels angered at his failure to end the jihadist crisis.