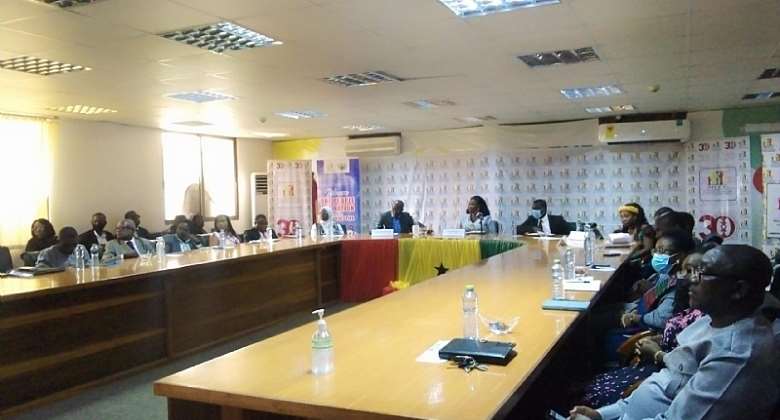 A Senior Lecturer at the Ghana Institute of Management and Public Administration (GIMPA), Dr Justice Srem-Sai, has called for a compromise among Ghanaians and political parties to pave way for the elections of MMDCEs.

There have been sharp disagreements between citizens and political parties on whether elections of Metropolitan, Municipal and District Chief Executives (MMDCEs) should be held on political party's lines.

Government, between 2018 and 2019 pursued the amendment of Article 55(3) to enable multiparty participation at the districts and 243(1) for the election of MMDCEs, as part of efforts to reform the local governance system and devolve more power and resources to the local communities.

However, a planned national referendum scheduled for December 17, 2019 was cancelled for lack of adequate public knowledge and broad-based consensus on the reforms it would entail.

Speaking at a roundtable discussion with Civil Society Organisations (CSOs), in Accra, Dr Srem-Sai said Ghanaians must find a common ground to pave the way for elections of MMDCEs.

The roundtable discussion organised by the National Commission for Civic Education (NCCE), was to solicit inputs from CSOs and other stakeholders into a policy document to trigger action as well as reignite discussions on the review of the constitution.

Discussions centred on the report and government's Whitepaper of the Constitution Review Commission (CRC).

The CRC was set up in 2010, to consult with the people of Ghana on the operation of the 1992 Constitution and on any changes that needed to be made to the Constitution.

Dr Srem-Sai said the referendum was aborted because of string of conditions that were attached to the whole process.

“So, it appears a lot of people want MMDCEs to be elected but they don't want it to be partisan, so, we need to find a way of addressing that issue.

“The politicians have a different view that it should be partisan and the people think it shouldn't be partisan, but we need to come to a compromise and forge our way out of the situation,” he said.

The meeting was held on the theme: “Three Decades of Uninterrupted Constitutional Rule: Revisiting the Agenda of Reforms.”

A post-2020 election survey by the CDD revealed that, 76 per cent of Ghanaians want the election of MMDEs, while 71 per cent of them want it to be conducted on non-partisan basis.

Ms Suzie Afutu, Lecturer, Central University, said it was time review of the constitution was given consideration.

She said “there had been considerable changes since the Constitution Review Committee (CRC) presented its report, and government’s whitepaper was published.”

Example was the number of regions which was recently increased from 10 to 16.

Also, she said, there had been some landmark Supreme Court decisions that had paved the way for some of the recommendations in the CRC to be materialised.

Ms Afutu, however, proposed a minimalist approach to the review rather than a total overhaul of the constitution.

Among the discussants was also Maame A. S Mensah-Bonsu, Fellow, London School of Economics.

Ms Kathleen Addy, Chairperson of the NCCE, said the Commission had undertaken series of public events to collate ideas and recommendations.

“The idea is that we want to trigger action from one of these bodies. Maybe, what we are able to present will give the opportunity for that trigger. That is our hope,” Ms Addy said.

She added that the Commission remained resolute to ensure that tangible actions towards amendment of the constitution was undertaken.

Where are DISECs in this whole galamsey brouhaha – Otumfuo q...
55 minutes ago