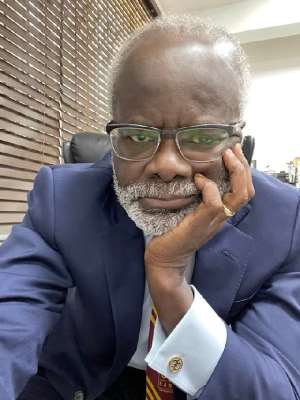 The Director of Communications for Progressive People’s Party (PPP), Felix Mantey says the people who played a role in collapsing Dr. Paa Kwesi Ndoum’s GN Bank have ‘kerosene’ in their heads.

According to him, the founder and bankroller of the political party and owner of the collapsed GN Bank had the dream to operate a well-regulated bank that seeks to bring banking services to people irrespective of their locations in the country.

He maintained that had it not been for the wickedness of people who sought power just to deal with their competitors, the bank would have been operating with not less than 500 branches across the country.

Mr. Mantey said this while discussing three years after the collapse of GN Bank as part of the banking sector clean-up by the Bank of Ghana on the Ghana Yensom morning show hosted by Mr Emmanuel Quarshie (The Hitman) on Accra 100.5 FM on Friday, August 19, 2022.

He bemoaned the situation where people get political power and use it to deal with their political opponents as well as their competitors in business.

He called on Ghanaians to frown on such acts, adding that, it is detrimental to the growth of the country.

He warned that Ghana will continue to suffer economically if the Minister for Finance, Ken Ofori-Atta and the Governor of the Bank of Ghana, Dr. Ernest Addison are not sacked.

"When GN Bank was being collapsed it had three hundred and fifty branches across the country with over a thousand workers, yet these heartless people saw no good in the bank," he said.

"The bank after its collapse has had its assets like motorbikes, pick-ups, generator sets and buildings among others rotting away," he bemoaned.

He charged the customers of the defunct bank to chase the receiver of GN Bank, Eric Nana Nippa for the payment of their locked-up cash.

He argued that the receiver claimed it has paid all the customers yet on a daily basis as many 150 customers of the bank troop to the Asylum Down office demanding to be paid.