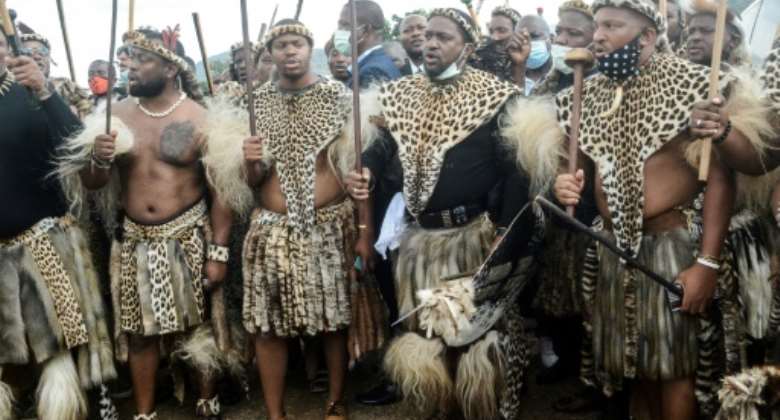 Future king: Prince Misuzulu, second right, arrives with Zulu warriors for the memorial service in May 2021 of his mother, Queen Shiyiwe Mantfombi Dlamini. By - (AFP)

South Africa's largest ethnic group, the Zulus, will on Saturday crown a new king following a year of feuding over who should ascend to the throne of the country's most influential traditional monarchy.

Misuzulu Zulu, 47, is set to succeed his father, Goodwill Zwelithini, who died in March last year after 50 years in charge.

Although the title of king does not bestow executive power, Zulu monarchs wield great moral influence over more than 11 million Zulus, who make up nearly a fifth of South Africa's population.

On Saturday, Misuzulu will enter the "cattle kraal" at the Zulu royal residence or KwaKhethomthandayo in Nongoma, a small town in the ethnic group's southeastern heartland province of KwaZulu-Natal.

There, he will take part in a secret rite designed to present the new monarch to his legendary ancestors.

King Goodwill Zwelithini, centre, was one of the world's longest-reigning monarchs -- he died last year after half a century on the throne. By RAJESH JANTILAL (AFP)

Afterwards, he will be introduced to his people, who will pledge to "accept the king as their king", said Gugulethu Mazibuko, an expert in African cultures at the University of KwaZulu-Natal.

Only selected members of the royal family and Zulu warriors, known as amaButhos, are allowed to witness the kraal rite up close, but large crowds are expected to gather at the royal palace to celebrate the event.

Zulu ceremonies typically see bare-breasted women in elaborate necklaces, waistbands and headbands sing and dance, while men wearing animal skins and holding shields and spears enact war dances in a tribute to the Zulus' militaristic past.

Zulu kings are descendants of King Shaka, the 19th-century leader still revered for having united a large swathe of the country as the Zulu nation, which fought bloody battles against the British colonisers.

The new monarch's first name means "strengthening the Zulus." Yet his path to the crown has been the subject of an acrimonious family dispute.

King Zwelithini left behind six wives and at least 28 children when he died last year at the age of 72 after a battle with diabetes-related illness.

Queen Shiyiwe Mantfombi Dlamini, King Zwelithini's third wife, was named regent after his death. She suddenly died shortly afterward, leaving a will that named her son, Misuzulu, heir to the throne. By RAJESH JANTILAL (AFP)

Misuzulu is the first son of Zwelithini's third wife, Shiyiwe Mantfombi Dlamini, whom the late monarch named in his will as regent after his death.

But the queen died suddenly a month later at the age of 68, sparking rumours that she had been poisoned.

She left a will that designated Misuzulu to ascend to the throne -- a development that did not go down well with other branches of the family.

After a failed legal bid to challenge the succession, Prince Simakade Zulu, the son of the late king's first wife, surrounded by a small group of people, underwent the cattle kraal rite last weekend, in a last-ditch move thwart Misuzulu's coronation.

And at a sombre press briefing held in Johannesburg's northern suburb of Fourways on Thursday, some of the late king's brothers disowned both heir-apparents and put forward a third prince as their candidate for the throne.

But President Cyril Ramaphosa in March recognised Misuzulu as the rightful king, paving the way for his ascent to the throne.

The next Zulu monarch will inherit a fortune and tap into a rich seam of income.

Zwelithini enjoyed the trappings of his royal status, receiving some 71 million rand ($4.2 million) a year from the government to run royal affairs and fund a lavish lifestyle.

He owned several palaces and other properties, with a royal trust managing almost three million hectares (7.4 million acres) of land -- an area about the size of Belgium.

In exchange the king serves as guarantor of social peace, said Sihawukele Ngubane, a specialist at the University of KwaZulu-Natal.

"He caters for the welfare of his subjects," she said, explaining royals are in charge of community and infrastructure development on the land managed by the trust.

After Saturday's rituals, the coronation process will be completed at another ceremony presided by Ramaphosa set to take place in the coming months.