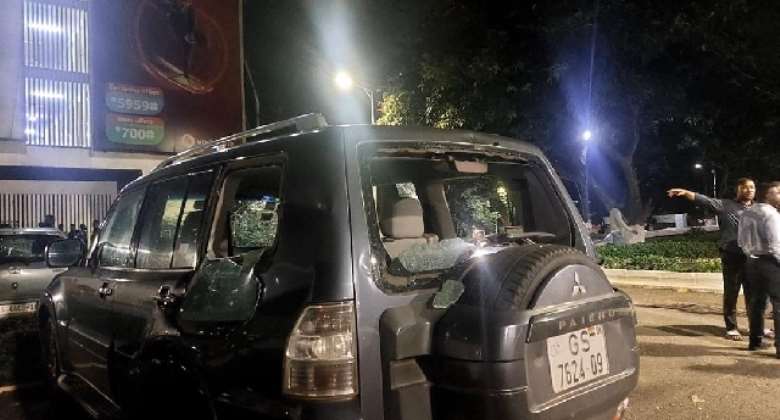 The reason why the clash occurred is not clear yet however the students were seen throwing stones and other materials at each other. #UniversNews @Ug_src pic.twitter.com/56OQq9lpHO

The Registrar of the @UnivofGh is expected to release an official communique this afternoon on the incident and highlight measures that the university is taking to prevent a similar event from occurring. #UniversNews

It was established that students of Sarbah Hall celebrated ‘Sarbahfest’ that day.

There must be an end to this. It is becoming a culture now. https://t.co/6BeJ3CbwA3

They went on a procession amidst singing, chanting and merrymaking.

This was where the statue of John Mensah Sarbah used to be situated before it was allegedly destroyed and taken by some residents of the Commonwealth Hall during last night’s clash. #UniversNews

One of the Vikings, however, strayed into the hall of the Vandals and was beaten and his phone stolen.

In retaliation, a horde of angry Vikings stormed the Vandals’ premises to avenge their fellow Viking.

This is the aftermath of the clash that happened between some residents of the Mensah Sarbah and Commonwealth Hall last night. #UniversNews

A free-for-all brawl ensued between the two halls leading to the destruction of property.

UG: A vehicle at the Mensah Sarbah Hall car park has been set ablaze as a result of the clash between the Vandals and Vikings this evening.

In the milieu, a car parked at Sarbah Hall was set ablaze and a statue was ransacked and taken away.

More from Headlines
ModernGhana Links
My wealth exaggerated; it’s crass to define me by my wealth – Sam Jonah
Council of State members blamed for humiliation of Akufo-Addo at the Global Citizens Festival
I’m committed to improving the development of the girl child – Akufo-Addo
TOP STORIES