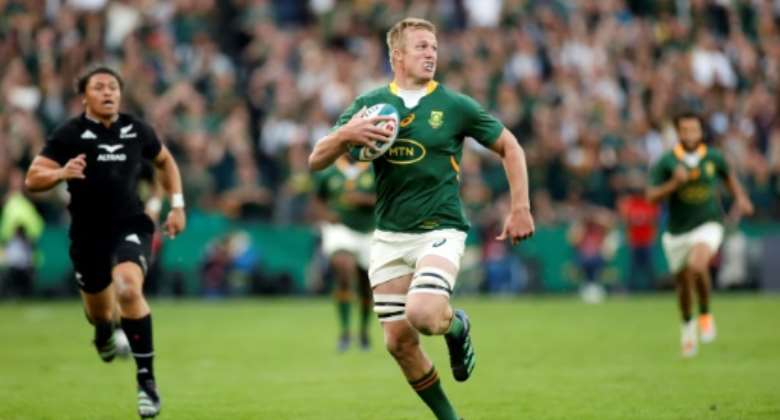 The Springboks have been both brilliant and lacklustre at home against Wales and New Zealand from July, winning three matches and losing two.

Australia has not been a happy hunting ground for South Africa, losing six of the last seven Tests there and drawing the other.

Here, AFP Sport highlights five challenges facing head coach Jacques Nienaber and his staff ahead of internationals in Adelaide on August 27 and in Sydney on September 3.

First choice right wing Cheslin Kolbe is ruled out by a broken jaw and understudy Kurt-Lee Arendse is suspended until late September.

That leaves solid Jesse Kriel, creative Warrick Gelant and uncapped 19-year-old Canan Moodie as candidates for the No. 14 green and gold shirt.

Nienaber will be keeping his fingers tightly crossed that Malcolm Marx is not injured during a tour Bongi Mbonambi was unable to go on due to injury.

South Africa often start with Mbonambi and introduce Marx early in the second half as a highly effective impact player. Both score regularly off driving mauls.

Joseph Dweba, the likely second choice in Australia, had a nightmare Test against New Zealand, conceding several scrum free kicks and penalties and being guilty of crooked lineout throws.

Loose forward Pieter-Steph du Toit was a colossus during the triumphant 2019 World Cup campaign in Japan and subsequently won the Rugby Player of the Year award.

But the Japan-based flanker has been hampered by injures since and was not his usual rampant self in the loss to the All Blacks in Johannesburg last weekend.

Apart from injuries, Du Toit did not have much game time before the Springboks season kicked off in July and Nienaber will hope for a big improvement soon.

Like Du Toit, the form of veteran Duane Vermeulen has been affected by a lack of game time and injuries, which led to mid-year surgery.

Nienaber gambled by choosing the 36-year-old warrior in his starting line-up last Saturday and it backfired with the No.8 taken off before half-time.

South Africa do have options if they decide to rest the 'Great Duane' or put him on the bench, including Jasper Wiese and Kwagga Smith.

Popularly referred to as the 'bomb squad', South Africa chose a bench of six forwards and two backs instead of the usual five-three split at the last World Cup with huge success.

A key factor in the success was utility back Francois Steyn, who provided cover at full-back, centre and fly-half. The other back was Herschel Jantjies, a specialist scrum-half.

But without injured Steyn this season, South Africa have been hit by injuries in several matches, triggering backline reshuffles. Now fit, Steyn was on flight to Australia.