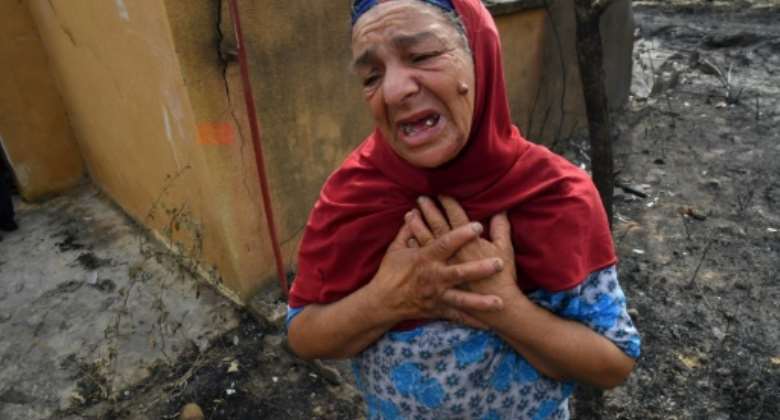 Algerian firefighters on Thursday brought under control a string of forest blazes that have killed at least 38 people including 12 who died in a bus trapped by the flames.

Deadly fires have become an annual scourge in Algeria, where climate change has turned large areas of forest into a tinderbox in the blistering summer months.

Authorities have been accused of being ill-prepared, with few firefighting aircraft available despite record casualties in last year's blazes and a cash windfall from gas exports amid soaring global energy prices.

Fire service spokesman Farouk Achour told AFP late Thursday that 16 fires were still burning across seven districts but that those in the worst-hit eastern areas, El Tarf and Souk Ahras, were under control.

In Souk Ahras, a large crowd gathered to mourn five members of the same family who perished in the flames.

The justice ministry launched an inquiry after Interior Minister Kamel Beldjoud suggested some of the fires were deliberately started, and authorities on Thursday announced four arrests of suspected arsonists.

At least 38 people have been killed including more than 10 children and 10 firefighters, according to multiple sources, including local journalists and the fire service.

Most were in the El Tarf region near Algeria's eastern border with Tunisia, an area which has been sweltering in 48 degree Celsius (118 Fahrenheit) heat.

At least 200 more people have suffered burns or respiratory problems, according to various Algerian media.

A journalist in El Tarf described "scenes of devastation" on the road to El Kala, a northeastern seaport.

"A tornado of fire swept everything away in seconds," he told AFP by telephone.

An AFP team in El Kala saw burned-out cars, exhausted people and charred trees amid the strong smell of smoke.

A witness, who asked not to be named, said 12 people had burned to death in their bus as they tried to escape when the fire ripped through an animal park.

Takeddine, a worker at the park who declined to give his full name, said staff had helped families with young children to escape as fire surrounded the park.

"Nobody came to help us, neither the fire service nor anyone else," he told AFP.

One of his colleagues died in the process, he added.

A medic in El Kala said 72 people had been admitted to the city's hospital, where nine had died and another nine remained in intensive care.

Associations across Algeria called for donations of money and medical supplies to help the victims.

The fire service said Thursday afternoon that 1,700 firefighters had been deployed to battle the fires, of which 24 were still raging.

A journalist in the mountainous area of Souk Ahras told AFP that a huge blaze in a forest nearby had sparked panic in the city of half a million people, where nearly 100 women and 17 newborn babies had to be evacuated from a hospital.

The scenes were reminiscent of fires last year which killed at least 90 people and seared 100,000 hectares (247,000 acres) of forest and farmland in the country's north.

That disaster provoked criticism of authorities over the lack of firefighting aircraft.

Algeria had agreed to buy seven such aircraft from Spanish firm Plysa, but cancelled the contract following a diplomatic row over the Western Sahara in late June, according to specialist website Mena Defense.

Authorities have rented a Russian water bomber, but it broke down and is not expected to be operational again until Saturday, Interior Minister Kamel Beldjoud said.

The civil protection service and the army have access to several firefighting helicopters.

'The forest is weakened'

Experts have called for a major effort to bolster the firefighting capacity of Africa's biggest country, which has more than four million hectares of forest.

Experts have called for a major effort to bolster the firefighting capacity of Africa's biggest country. By - (AFP)

One specialist, who asked not to be named, told AFP that in the 1980s the country had 22 Grumman aircraft for battling forest fires but that they had been "sold on the cheap, without any alternative solution being proposed".

On Thursday, Prime Minister Aimene Benabderrahmane defended the government's response, saying that the country had ordered four new firefighting aircraft -- but that they would not be available until December.

He added that strong winds had exacerbated the blazes and said authorities were "deploying all their means" to extinguish them.

Retired academic and forestry expert Rafik Baba-Ahmed said in a video published on social media that "winds of over 90 kilometres (55 miles) per hour make the work of water bombers difficult if not impossible".

He said bad land management had added to the problem.

"Today, the forest is weakened. It has been chipped away at," he said.