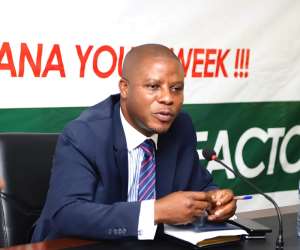 Member of Parliament for Bortianor-Ngleshie-Amanfro, Sylvester Tetteh, has accused the National NASARA Coordinator of the party, Alhaji Aziz Futa, of breaching the party’s code of conduct by declaring support for a Presidential hopeful.

Mr. Tetteh wants Alhaji Aziz Futa to be hauled before the party's Disciplinary Committee and be suspended.

He claims he was “inciting religious inclinations as to who should lead our party in the next election.”

Not just declaring support for the Vice President, but he is declaring the next President of this country will be a Muslim. That is unfortunate.”

“NPP tradition is alien to religious inclinations in this country, and the constitution of the republic even frowns on it.”

The National Executive Council (NEC) of the NPP plans to meet all presidential hopefuls of the party to avert a breach of the party's Code of Conduct.

The planned meeting comes on the back of declarations by some MPs and leading members of the party for some potential contenders to lead the NPP into the 2024 elections.