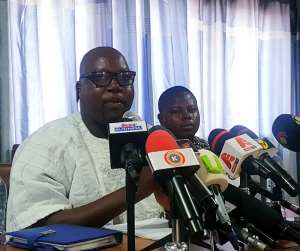 The Importers and Exporters Association of Ghana has called on the government of Ghana and the Food and Drug Authority (FDA) as a matter of urgency to come to the aid of Ghanaian wheat flour producers.

It wants government to ban the influx of smuggled wheat flour from Ivory Coast to save the local flour milling companies.

According to the Association, most of these imported wheat flours are either unwholesome or smuggled through unapproved routes into the country from neighbouring countries.

Addressing the media in Accra on Thursday, 18 August 2022, Samson Asaki Awingobit, Executive Secretary of the Association said most of the alleged smuggled wheat flour has foreign languages inscribed on the bag/jute sack which makes it difficult for one to identify the expiration date or wholesomeness.

"It is of much concern that, the majority of these wheat flours on our local market space do not have the approval of either the Food and Drug Authority or Ghana Standards Authority seal on them, contrary to the laws governing the importation of consumable goods into the country.

"Our concern as an association is the failure of the various institutions mandated to clamp down on these illegalities, which stands as a threat to the health and safety of the public and also pose a serious threat to the growth of the sector," he stated.

Mr. Samson Asaki Awingobit explained that the influx of the unapproved wheat flours on the market has made the local producers lose huge revenues on daily basis.

He, however, urged the government to put in place effective mechanisms that will create an enabling environment for the local flour milling industry to do business at ease.

This, he emphasised, the local flour producers will stand a better chance to compete with the neighbouring countries who sell their products at a lower rate.

"The importation of consumable goods such as rice and flour into the country through unapproved routes and means should be a thing of the past, considering the negative effects it has on our local producers", he stated.