Would Kenyan women's rights be safe under William Ruto? Why they might not be

By Awino Okech - The Conversation
Article 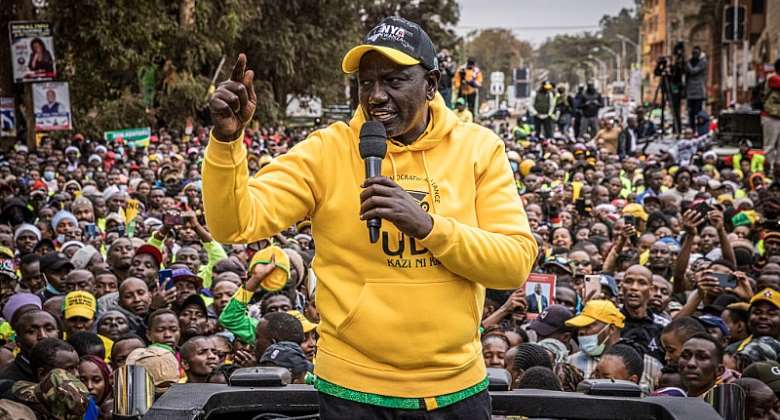 William Ruto has been declared the winner of Kenya's presidential election. The final outcome, however, remains in the balance following a challenge from his main competitor, Raila Odinga.

As president, Ruto would be charged with defending the 2010 constitution. It overhauled the governing framework of the country by devolving power to county governments. It also enshrined greater rights for women and young people.

However, it's worth remembering that Ruto led the “ No campaign ” during the 2010 constitutional referendum. One of the key contestations within Ruto's camp – which included religious leaders – was the modest provision around the right to abortion under specific circumstances.

Ruto and his wife Rachel are staunch Christians . In my view, a presidency that publicly foregrounds the centrality of religious leaders and Christianity as a governing principle is a cause for concern in a secular state. This is pertinent in a global context in which religious fundamentalism continues to shape gender freedoms in negative ways. Therefore, can he be relied on to defend Kenya's modest wins for women and girls?

It also promises to provide financial and capacity building support for women through a “Hustler Fund” for women-led co-operative societies. Its other pledges include increasing personnel at gender desks in police stations, addressing spousal consent in land sales and tackling low access to sanitary pads.

The coalition promises to establish a social welfare fund for Kenyan women working abroad as a safety net for distressed diaspora citizens.

Kenya Kwanza commits to deploying adequate numbers of community health workers on a regular stipend. Costs will be shared by the national government and county governments. It also says it will make safe, clean and affordable cooking fuels available.

The bulk of these commitments are consistent with demands made by women's rights activists that led to the current provisions in the constitution. These demands include those addressing land control and ownership for women, and the two-thirds gender rule.

Additionally, through donor-funded interventions, work has been done on access to sanitary pads and creating gender desks at police stations.

But translating these constitutional aspirations into policy positions and actions has been slow. Often it's been deliberately thwarted by political actors.

For example, the inability to fully implement the two-thirds gender rule has been bogged down by male MPs citing “cultural norms” and the need for meritocracy.

At the heart of fully implementing these policy propositions lies the more fundamental question of structural inequality that is sustained by cultural and religious diktats.

It is here that Ruto's religiosity and his desire to anchor Christianity in particular as his government's guiding compass becomes critical.

Religion and culture have been loud undercurrents in debates on rights, justice and freedom. That under Ruto, religious leaders and associated lobbies will become key actors in policy making is a legitimate fear. Kenyans concerned about equity should keep this in mind if global trends are taken seriously.

Across the globe, religious groups and conservative parties have coalesced around policy and legal propositions, often invoking a challenge to gender ideology as the basis to limit women and girls' bodily autonomy.

In June 2022, the US supreme court overturned the Roe v Wade ruling. This was a 1973 decision that confirmed that the US constitution gave women the right to have an abortion, thus limiting federal and state abortion laws that restricted these rights.

The Roe v Wade decision cements a precedent of marshalling moral and religious positions in policy making around women's rights and gender. This precedent was set in motion during former president Donald Trump's era through federal funding cuts to organisations such as Planned Parenthood .

This was also a period that led to concerted efforts in multilateral spaces, such as the United Nations, to erase the term “gender” and replace it with “women”. This move was aimed at thwarting conversations on gender equality that weren't solely invested in biology as the basis for understanding inequality.

Similar conversations on gender ideology have happened across Europe in France, Germany and Denmark.

Underpinning the organised resistance by religious, conservative lobbies and political parties is a desire to return to interpretations of gender equality that roll back freedoms secured for women and girls over decades.

If Kenyan and transnational feminist organising has taught us anything, it's that preparation rather than a response to retrogressive forces is key. I offer three key messages.

The first is that the country must map the arguments, institutions and structures that could be deployed to actively subvert hard-won freedoms. Parliament offices not constitutionally recognised, like those of the first and second lady, and county assemblies are important places to watch and engage.

Second, as feminist researcher Sonia Correa points out , religious groups that are working to reverse rights are organised globally. Countering this backlash against women's rights must be transnational and global in nature .

Finally, it will be critical to create spaces to protect and secure the most vulnerable from what will be interpreted as state-sanctioned defence of “Kenya's morality”.

Feminist history has taught us that when the “soul of a nation” is contested, it's women, girls and those considered deviants whose bodies will serve as the theatre for that battle.

Awino Okech does not work for, consult, own shares in or receive funding from any company or organisation that would benefit from this article, and has disclosed no relevant affiliations beyond their academic appointment.