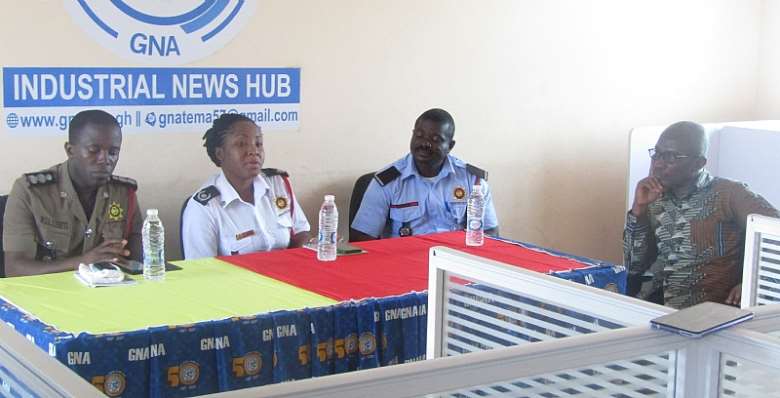 The Ghana National Fire Service (GNFS), Tema Regional Command through the Safety Department has embarked on a fire risk assessment audit of the premises of media houses in the Tema Region.

The exercise forms part of the broader objective of the GNFS to help media establishment and owners identify potential factors that could trigger fire outbreaks, and how to mitigate the hazards.

According to Divisional Officer Grade III (DOIII) Nancy Amaka, who was the leader of the team said the team undertook a similar exercise at Plan B FM a private radio station, and the state-owned GBC Obonu FM, and would visit the Graphics Group Communication, and the New Times Corporation later in the week.

DOIII Amaka interacting with the media after the exercise at the Ghana News Agency Tema Regional Office as monitored by the Communication for Development and Advocacy Consult (CDA Consult) the exercise forms part of a nationwide exercise by the service sanctioned by the Chief Fire Officer to assess the fire risk of public institutions.

She said the risk audit even though ongoing was a directive from the Chief Fire Officer and forms part of the mandate of the GNFS, however, an institution can request for risk assessment audit.

She said the service also issues a fire safety certificate to institutions that goes through an assessment which is renewable annually.

She said that with the renewal of the fire certificate, most institutions especially the private ones do not default as they were eager to put in place to prevent fire from gutting their properties.

“Safety is a shared responsibility, if we recommend and it’s not implemented then we remain static, we are therefore pleading with institutions to partner with the Safety Department of the GNFS for the implementation of our recommendation,” she added.

She also appealed to the media not to only concentrate their reportage on the negativity of the GNFS work but also drum home the positive side and help educate the public on fire-related issues.

She added that the public must be encouraged to have numbers of the nearest fire stations in their areas and also know the landmarks around their community or facility to help firefighters to easily locate the scene and reach the person on time to save lives and properties.

DOIII Amaka also advised the public to put their safety at par with security to give an avenue of rescue in case of a fire outbreak stressing that as much as people think about their security they must also consider their safety and put in measures to safeguard it.

Assistant Divisional Officer Grade II (ADOII), William S. K. Klebeti, who was part of the team also explained that the audit was also to help the establishments put in precautionary measures to avert any impending fire.

He indicated that the GNFS after the audit, a report on the risk and recommendations would be sent to the Chief Fire Officer for action to be taken.

He said however that for the institution to implement its recommendations, they do the audit accompanied by designated staff who would also take note of the hazards and the recommendations.

He noted that the GNFS officers would later visit the premises again to do a review to ascertain if its recommendations had been adhered to, and the needed equipment put in place with adequate training for the occupants on how to use them in case of an emergency.