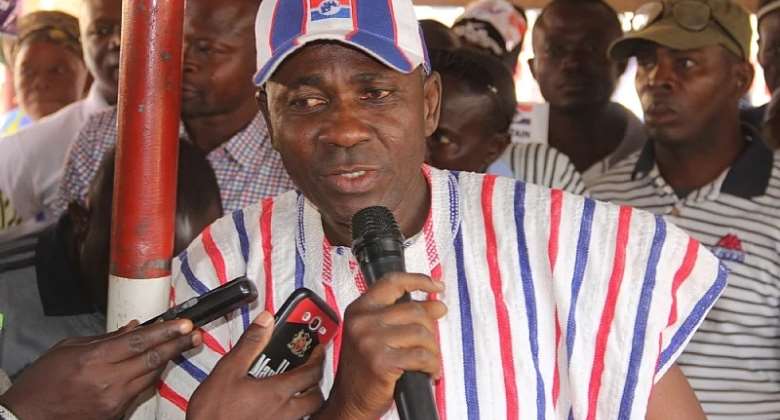 A former Deputy Minister for the Upper East Region, Hon. Frank Fuseini Adongo has waded into the ongoing repartee between Hopeson Yaovi Adorye and members of the ruling New Patriotic Party (NPP) particularly northerners regarding his ethnocentric comment.

Dr. Adongo has said the NPP as a political has not issued any statement anywhere to suggest that it had no place for northerners as far as the flagbearership position of the party is concerned.

According to the former Member of Parliament (MP) for the Zebilla Constituency, the negative comment by Mr. Adorye is purely his, which should not be blamable on the NPP.

He lamented that the NPP is already struggling to correct the negative impression created by the opposition NDC that suggests that it [NPP] is an Akan party.

“I want my people [northerners] to understand that what Hopeson has said is an individual error and not NPP’s error. What Hopeson said cannot represent the position of the over 5 million people in NPP, and that is why he has taken responsibility for his action by apologizing,” he stated.

Speaking an interview with some Journalists in Accra, Hon. Adongo called on all sons and daughters of the five regions of the north to pardon Mr. Adorye for his "reckless comment", which he reiterated does not represent the position of the NPP as a political party.

Dr. Adongo stressed that the main opposition party, the NDC will capitalise on Hopeson Adorye's comment to create serious disaffection between the NPP and the people of the north.

The former Upper East Deputy Regional Minister insisted that the NPP and most especially the current President, Nana Addo Dankwa Akufo-Addo had proven beyond every reasonable doubt that he had the people of northern Ghana at heart and “he has been in good relationship with all northerners”.

“As a peace advocate, I think the matter should be given the needed attention to nib in the bud the ugly consequences it may score. “A lot more northerners have committed their royalty and resources to the advancement of the party, beyond the northern regions of Ghana.

“Therefore, Northerners deserve honour and should be treated as such. We deserve gold for our contributions to the NPP over the years”.

Dr. Adongo commended the National Executives of the NPP for summoning Mr. Hopeson Adorye and possible sanctions. He also expressed the need for the party to disassociate itself from the comment by Hopeson Adorye in order to maintain the good relationship that exists between the NPP and the people up north.

Mr. Hopeson Yaovi Adorye was reported to have said in the NPP tradition people from the north are only fit for running mate positions hence the need for party faithfuls to reject Vice President, Dr. Mahamudu Bawumia’s bid to become the flagbearer of the party.

Mr. Adorye dropped the bombshell during a health walk dubbed "Adoru Wosu" organized by supporters of Mr. Alan Kwadwo Kyeremanten, an aspiring presidential candidate of the NPP in Kumasi.

Mr. Adorye’s comment has been widely condemned by majority of Ghanaians especially those from the north. Even though Mr. Hopeson Adorye has come out with a statement to apologise to the people of the north, his apology seems not well received.