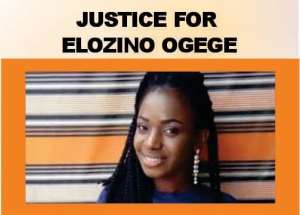 The Advocacy for Alleged Witches (AfAW) urges the Delta state government to expedite the trial of the suspected killers of a 300-level Mass Communication student of Delta State University, Abraka, Elozino Ogege. It is sad to know that years after the horrific murder of this young lady, the trial of the suspects has lingered for no reason. Justice has remained elusive. Relatives of Ms. Ogege have yet to find the closure that they urgently need and deserve.

AfAW recalls that suspected ritualists, also known as Yahoo Boys, with security guards murdered Ms. Ogege in Abraka in 2018. According to media reports, these savage individuals, motivated by the superstitious quest for ritual money and wealth, abducted Elozino Ogege and decapitated her. They plucked her eyes and cut off her tongue and breasts. The police arrested some of the suspects and put them on trial at a court in Asaba. Witnesses have testified before the court. However, four years after the gruesome murder of Elozino Ogege, the matter is still in court: no judgment has been issued; nobody has been convicted. Nobody is serving any punishment for committing this atrocity.

AfAW condemns in very strong terms the lack of diligence in prosecuting the suspected killers of Elozino Ogege. This trial is a clear case of justice delayed because there is no reason for this reluctance and unwillingness to conclude the case than an intent to ensure that justice is eventually denied. The way that the Delta state government is handling the ritual murder of Elozino Ogege sends the wrong signals. It creates an impression that ritual attackers and murders could get away with their crimes.

AfAW appeals to Gov Okowa to rise to his duty and ensure no further delay in the trial of the suspected killers of Elozino Ogege. The government of Delta state should act and ensure that justice is served.