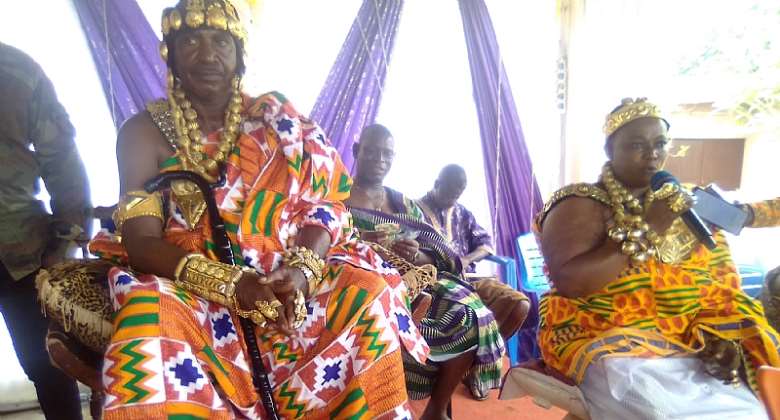 A US-based businessman has been installed as Nkosuohene (Development Chief) in Gomoa Nduem in the Gomoa West District to facilitate infrastructure development for the area.

Under the stool name Nana Tekyi Nyarko I, the newly installed Chief was seen riding in a palanquin amidst drumming and dancing through the principal streets of the town.

Addressing the chiefs and people to climax the annual Ahobaakese festival at Gomoa Nduem last Sunday, the Chief of the community, Nana Kwakye Arhin Daboah XVIII welcome the Nkosuohene and assured him the support of the people to realize his dreams and aspirations.

He noted that the community lack some social amenities needed to improve the lives of the people.

Nana Kwakye Arhin Daboah XVIII disclosed that the festival was to raise funds for the completion of the Community Center to be used for programmes and other social activities to lessen their burden.

"We are undertaking Self-help projects to improve our social activities and also host people who visit our tourist sites here in Gomoa Nduem.

"I will like to appeal to our Member of Parliament, DCE for Gomoa West and the Central Government to give us at least a CHPS Compound to give the people in Gomoa Nduem and its surrounding communities easy access to healthcare delivery," he stated.

The queen mother of Gomoa Nduem, Nana Ekua Botwey II expressed concern over the increasing cases of teenage pregnancies and tasked parents to monitor the activities of their children especially the girls.

According to the QueenMother, she has been sensitizing the girls about the dangers associated with early sex adding that Girl's Clubs have been formed in the community to spread the sensitization programme.

Nana Ekua Botwey II encouraged parents to invest in their children's education adding that was the only way to eradicate poverty-related hardships.

The newly installed Nkosuohene, Nana Tekyi Nyarko I pledged to work assiduously with Nananom for the early completion of all projects that have been initiated by the people.

Nana Tekyi Nyarko I further stated that as a Development Chief, he would do everything possible to improve the lives of the people and also bring Gomoa Nduem community to the limelight.

He disclosed that His Excellency Nana Addo Dankwa Akufo Addo-led NPP Government would continue to provide the needed infrastructure to improve the lives of the people.

The NPP Chairman called on parents to take advantage of the Free SHS policy by ensuring that their children further their education at least to the Senior High School level.

The Member of Parliament for Gomoa West, Hon. Richard Gyan Mensah donated 50 bags of cement and an undisclosed amount of money to support early completion of projects.

No insurance package for commercial 'pragya' operators - NIC
56 minutes ago