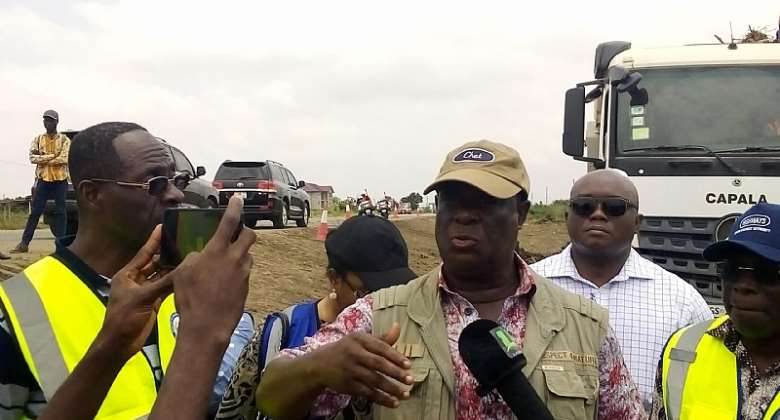 Mr Kwasi Amoako-Atta, Minister of Roads and Highways, says Government's attempt to dualise all major roads in the country is very much on course.

He said the many ongoing road dualisation projects attested to the fact that the Government was committed to making that happen.

He said dualisation projects such as the Accra-Kumasi Road, 64km Ashaiman-Akosombo, as well as the first 17km of the Tema-Aflao road were ongoing and at different stages of completion.

The Minister added that the dualisation of the Accra-Cape Coast Road, was, however, at the preparation stages.

“I am very much excited, Government is happy about what is going on. You know for 2020 and 2021, the President of the Republic, Nana Akufo-Addo declared those two years as 'Years of Road,' and across the country; north, south , east and west, road works of all forms, road activities are going on simultaneously,” he said.

“The year of roads continues, but in 2022, Government is emphasising on dualisation of our roads. A number of other road projects are also being dualised and we all know the importance of dualisation of roads. It's long overdue but it's better late than never,” Mr Amoako-Atta added.

He said this in an interview with the media after inspecting work on the Ashaiman-Akosombo dualisation road project on Wednesday.

Work on the 64km Ashaiman-Akosombo road project, which forms part of the Eastern Corridor road project, commenced in May 2022 and expected to be completed in 30 months (September 2024).

The project, which will cost some €256 million, is being constructed by INZAG Gmbh, and encompasses the construction of two-lane dual carriageway and two-lane service road from Ashaiman to Sebrepor.

The project will also see the construction of an interchange at Asutuare and a flyover at Ashaiman.

Mr Amoako-Atta said Government recognised the importance of the road to the economic development of the country.

He said completion of the project would also ease vehicular traffic and bring relief to the people in the area.

He charged the contractor to speed up work on the project to ensure timely completion.

“I wish we don't go beyond September because this road and others are very crucial,” he said, adding that “I have also directed the contractor to work day and night to speed up the completion of this project.”

Mr Kwabena Bempong, Resident Engineer, explaining work done so far, said mobilisation to site had started with some work having already commenced, including clearing edges of the road to pave way for the start of the earth work.

He explained that the project had been divided into four sections, the first of which involved the construction of a 6km, which has a two-lane dual carriageway with service roads from Ashaiman to Gbetsile.

Mr Bempong added that three river bridges and 11 pedestrian footbridges would be constructed as well as provision of walkways, street lights, and drainage.

The Resident Engineer also noted that engagement with utility companies – the Ghana Water Company Limited and the Electricity Company of Ghana, as well as telecommunication companies was ongoing for relocation of affected lines.