Time for Ghana to leverage our digitization for digital manufacturing - Bawumia 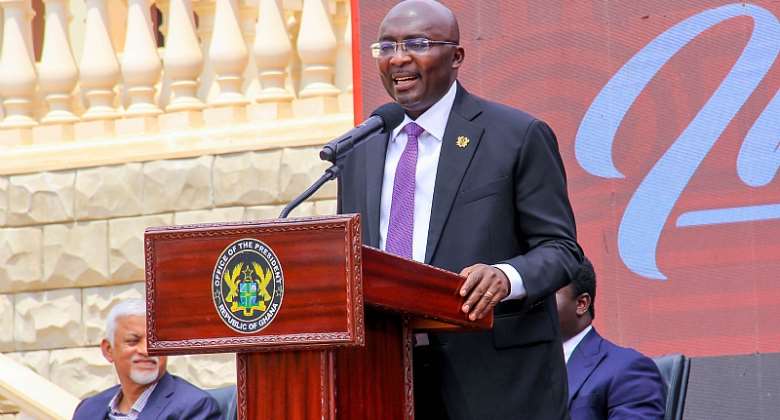 Digital manufacturing is a technology-based approach to production which enhances productivity.

Speaking at the inauguration of Academic City University College, a private University at Haatso in the Greater Accra Region on Tuesday August 17, Dr. Bawumia said, Ghana venturing into digital manufacturing will create more opportunities, jobs and income for Ghanaians.

"We need to explore and support a move into digital manufacturing," Dr. Bawumia said.

The Vice President added that Ghana can move more easily into a digital manufacturing than many other sectors, and called on Academic City University, noted for its innovations despite being in existence for about 4 years, and other institutions to lead the process, with support from Government.

"I am asking the Academic University to take the lead in this area. We believe that as you move into Artificial Intelligence, Robotics and 3D printing and all of that, we need to leverage all of this into the manufacturing sector.

"Where Ghana has a probable comparative advantage is in digital manufacturing. There are many parts, whether you are looking at medical equipment like syringes or car parts that can be 3D printed.

"I am talking of what we can do now. That we can do, and I am going to challenge Professor McBagonluri because he is an inventor who has already written a lot on this issue of digital manufacturing.

"Our mechanics in Suame and other places can use a lot of spare parts that Ghana could manufacture digitally and also export.

"So I'm challenging you to help Ghana move into digital manufacturing and we will create more jobs and more incomes for our people. And we will support you and work in partnership with you to achieve this," he stated.

The Vice President, also encouraged higher education institutions to prioritise programmes that offer young people skills that are relevant to the job market, as well as help in solving problems.

He explained that the provision of relevant tertiary education to the youth, is key to the country's development agenda, as it will create the right human resource for industrial growth, which will impact positively on the living conditions of Ghanaians.

"Higher education institutions, both public and private, are encouraged to provide graduates with job-relevant skills in order to meet the demands of the job market," Vice President Bawumia urged.

He added, "This is necessary to ensure accelerated industrial growth, which will improve Ghanaians' living conditions and contribute and enhance economic growth."

Giving an example of such relevant programmes, Dr. Bawumia highlighted the indispensability of skills in digital and information technology in the 21st century, to economic transformation, which he observed has accounted for a more focused, relevant tertiary education.

"Undoubtedly, the successful economic transformation of every nation in the 21st century would significantly rely on the provision of tertiary education in digital and information technology. This is responsible for the growing global demand for high-quality and relevant tertiary education, which concentrates on teaching the youth problem-solving skills by harnessing the various human and technology resources at their disposal."

In recognition of the need for the acquisition of such relevant training and skill, the government's vision and goals, Dr. Bawumia noted, are also in tune with the global human resources demands, having initiated reforms in the past few years.

"In the past several years, we have implemented a number of ambitious education reforms and policies to reorient the country's education system to develop a critical mass of Ghanaians who are assertive and empowered."

"Through the Ghana Tertiary Education Commission, the Government of Ghana is committed to adopting a coherent, well-articulated, and holistic policy framework that would enable our tertiary education system to meet the needs of the learning society and knowledge-driven economy we want," he intimated.

The Vice President revealed government’s plans for universities in the newly created regions that will focus on science, technology, engineering, and mathematics (STEM).

While acknowledging the significant contribution that private universities make to the overall educational system of the country, to compliment government's efforts, Dr. Bawumia commended Academic City University for the innovative programmes they are offering.

"We appreciate the contributions of these private universities, like Academic University, as viable alternatives to state tertiary institutions, which are unable to accommodate the high number of pre-tertiary students and adult students who are interested in furthering their education but are unable to enrol in public schools.

"It has only been four years since the Academic City University opened its doors, and it has already assumed a pivotal position in reshaping higher education in Ghana and the sub-region. A feat which astounds me beyond measure," said the Vice President.

He stressed, "Dr Bawumia lauded the young university for its initiative to develop a less expensive ventilator (which is currently going through appropriate tests) during the covid pandemic."

He also commended them for being the first institution in the region to offer a bachelor's degree program in artificial intelligence and other "forward-thinking programs, such as robotics and biomedical engineering."