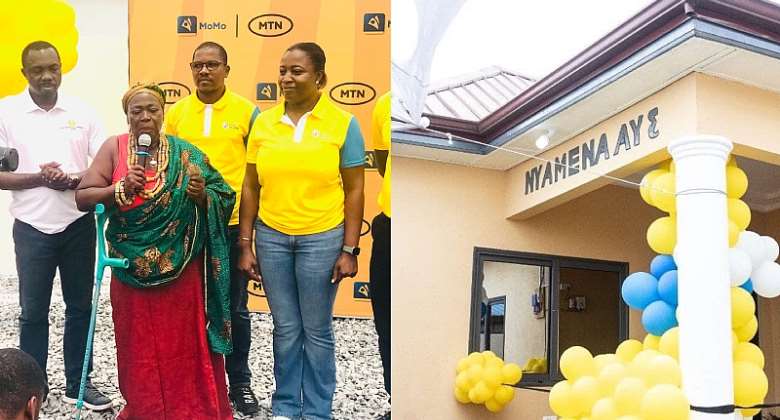 Mrs Rita Tetteh Nhyiraba, who played the lead role in MTN Mobile Money's (MoMo) first-ever advert, "Minsa’ Aka", has revealed the unimaginable benefits of MoMo to Ghanaians and those outside.

She revealed that MoMo has helped resolve several marital issues.

While speaking on the sidelines of a ceremony held today, Wednesday, August 17, by MobileMoney Limited (MoMo), to hand over a 2-bedroom well-furnished apartment situated at Amasaman-Dobro to her, she stated has made it easier for people to attend the needs of their partners faster and conveniently to avoid stress.

"What I will tell the customers is that MoMo is real. It has been resolving several marital issues even outside Ghana, and now people don't have to stress before sending money to their partners." "MTN as a telco has no competitor; we are far ahead," she said.

The MobileMoney Limited held a colourful handing-over ceremony of a fully-furnished building in appreciation to Mrs Rita Tetteh Nhyiraba who, through a thought-provoking advert, garnered massive attention to the then newly established MobileMoney business about 13 years ago.

The 2-bedroom apartment has a spacious hall, a dining hall, a bar, a master bedroom, a walk-in closet, a bathroom, a guest room, a visitor bedroom, and a well-equipped kitchen at the cost of over GHS300,000.

Mrs Rita Tetteh Nhyiraba offers her heartfelt appreciation to the Almighty God, MTN Ghana and MTN MoMo for the kind gesture and all the numerous support offered her since the start of the advert.

On his part, the Chief Executive Officer (CEO) of Mobile Monet Limited, Mr. Eli Hini, reiterated the several dedications and commitments of Madam Mrs Rita Tetteh Nhyiraba to the growth of MoMo in Ghana and even in the diaspora.

"Today is a very special day for us (the MobileMoney Limited) and our mother, Mrs. Esther Tetteh Nhyiraba as we hand over this building in recognition of her commitment and devotion to us, particularly her popular "Mensa 'Aka" advert, which took us to the limelight. In fact, she has been very helpful and has always been there for us anytime we call," he said.