Tribute To Nana Baafour Osei Akoto by the Government of Ghana at the Funeral on Thursday, November 14, 2002 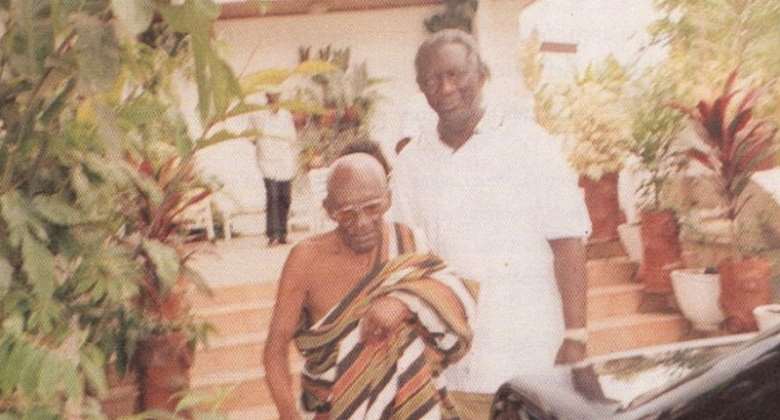 Here lies before us today, the man that should properly be described as the architect of the political philosophy that spawned the ruling Party in Ghana today.

The guiding principle of the New Patriotic Party has been universally acknowledged as liberal democratic and is popularly dubbed as coming from the Danquah-Busia tradition.

The tradition might bear the names of the two luminaries who articulated and wrote the philosophy of the Party; but there is no question but that the man who built the Party, who brought all the like-minded people from around the country under the same umbrella and provided the backbone, is the man whose mortal remains lie before us today.

Nana Baafour Osei Akoto had no challenger in political strategy and at every stage of Ghana's political history; he displayed this acumen to great effect.

By 1954, it was obvious that Kwame Nkrumah had outmaneuvered the men who brought him back to Ghana to be Secretary of the UGCC, the political party they had founded.

The CPP appeared to sweep all before it and the country was in real danger of becoming a de-facto one party state even before the formal attempt by President Nkrumah to declare it as such a decade later.

Professor K. A. Busia was a lone voice in Parliament, J.A Danquah was restricted to the frustrating role of a Cassandra: warning of dangers and being ignored; and there was a general sense of despondency among the supporters.

It was a tricky role he had to play but he had one big advantage; he was a man that had the courage of his convictions and he moved to stop what he saw as the threat to the core beliefs of Ghanaians.

Today, decentralization does not strike fear in anybody's heart; devolution of power does not evoke a specter of disintegration of the state; indeed, there is general consensus that local people should have control on matters affecting their everyday lives.

Baafour Osei Akoto believed in this passionately and was convinced that most people in the country wanted the same. Fifty Years ago, we almost went to war over this universally acknowledged truth that a state is better run when power is devolved from the center. At the time, the popular word was federalism, which in essence is not different from devolution of power.

Indeed, this is now enshrined in our Constitution.

Today, the concept of multi-partyism is accepted to the point of being enshrined in our national Constitution. When Baafour Osei Akoto advocated that it is possible to have different views and still be a patriot, he was labeled a secessionist and a subversive.

His great attribute was in using traditional knowledge and skills of the court to argue points that have a resonance in modern political theory and practice.

In his role as a linguist at the Asantehene's court, he used the diplomatic and trading contacts of the Asante nation to forge political alliances across the country. How else was he able to have such a strong voice outside his traditional area of Asante and Brong Ahafo. He had strong links with, and influence among the leadership of the North, what is today the Volta, Eastern, Central and Western Regions; and used this to great effect in forging what became the U.P.

And if proof were needed that this was a man who had the courage of his convictions and was NOT a narrow-minded tribalist, it came in the role he played during the Acheampong regime. After all, Acheampong was an Ashanti and Baafour Osei Akoto could easily have identified with his tribesman.

The easy option would have been to keep quiet and give his endorsement of the fraud that was being perpetrated on the people of Ghana; many did and were wel recompensed.

And after his experiences of political detention and internal exile from 1959 to 1966, he would have been forgiven if he had chosen the easy way out. For he was, after all, by the time of the Acheampong regime, an elderly man.

Instead, having been convinced that the nation was at risk, he got up and did something about it. He went around the country and marshaled a powerful coalition to fight Acheampong.

He enlisted Ewes, Fantes, Dagombas, Akyems, indeed, everybody who believed in the freedom of the individual, without thinking of what tribe or religion they belonged to.

The legacy he leaves is a challenge to this generation. Today when our culture and traditions are under severe stress from the pressures of other cultures, many take the easy option of simply abandoning our culture and beliefs and adopting foreign ones.

This government is extremely proud that it has the opportunity to lead the nation to pay a well-deserved tribute to this freedom fighter, patriot, traditionalist, and trail blazer.

We thank God that in spite of the vicissitudes he had to endure; the Almighty spared his life long enough to have seen many of his most cherished dreams become reality.

The biggest tribute will be to make a success of the liberal democratic tradition in government and transform the economy to make the lives of the people better. This is the pledge of this government.

Dr. Owusu Afriyie Akoto is the son of Okyeame Baffour Akoto and a half-brother of President John Agyekum Kufuor