Why Ghana is important to suriname 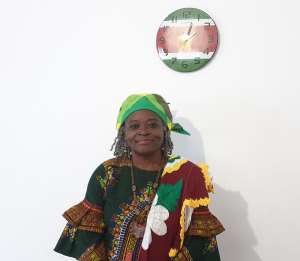 Ghana is important to Suriname because of the transatlantic slave trade when Africans were shipped out of Ghana to Suriname. Both countries could also mutually benefit by sharing quality experience in the area of their challenges with illegal gold mining, Suriname's Ambassador Extraordinary and Plenipotentiary to Ghana Mrs. Fidelia Graand-Galon tells MARTIN-LUTHER C. KING in this interview in Accra.

She hopes to see both countries establish direct airlinks between them soon.

A: Suriname is a country of multi-ethnic people with descendants from Africa, Asia and Europe. Immigrants from our neighboring countries, such as Brazil, Guyana and French Guyana are populating Suriname as well.

The official language is Dutch and the lingua franca is Sranantongo which is an Afro-Surinamese language understood by all Surinamese regardless of the ethnic group.

Suriname has about 24 languages with a population of a little over half a million.

The people of Suriname are Christians, Muslims, Hindus, Afro, native and other religion. Indian descendants are the largest ethnic group. There are also Java Indonesians, Chinese and Koreans, but not too many.

Suriname is in the South American continent but its northern border is the Atlantic Ocean, which also makes it a Caribbean nation.

The transatlantic slave trade has forced Africans to Suriname. Due to the marron age during slavery, we have the formation of six Afro-Surinamese tribes (Maroons) along six rivers across the Suriname hinterland. This caused Afro-descendants to have 7 languages, with the national language being one of them.

Q: Kindly assess the current state of bilateral relations between Suriname and Ghana.

A: The two countries have good bilateral relations, especially since Suriname has opened an embassy in Ghana. A roadmap of the cooperation has been signed by both countries.

Q: How long has Suriname-Ghana relations been in existence?

A: Suriname-Ghana relations has been in existence for 3 years now.

Q: And how long ago was the Suriname Embassy established in Ghana?

A: The Suriname Embassy was established in 2019.

Q: In which other countries in Africa do Suriname also have embassies?

A: Suriname does not have any embassies in any other African countries, apart from Ghana.

Q: Why is Ghana very important to Suriname?

A: Ghana is important to Suriname because of the transatlantic slave trade where Africans were shipped out of Ghana to Suriname.

Ghana is also important to Suriname because it can assist Suriname in oil and gas technology since Suriname also has both natural resources.

Both countries also have the same challenges in gold mining, which is the illegal small gold mining and contamination of the environment.

Both Suriname and Ghana have a lot of similarities, like south-south cooperation with Asia and other African Caribbean and Pacific Nations (ACP).

Q: Suriname is rich in bauxite, gold and petroleum. How can Suriname collaborate with Ghana to harness these resources?

A: Ghana and Suriname can exchange human capital using the human resource of both countries.

Both countries can also collaborate in sharing ideas on lessons learned in each country with regard to the mining of natural resources.

They can exchange scientific studies in the mining sector, using lessons learned from each country so they can get more end-products from the raw materials they have.

Suriname and Ghana can also have a student exchange program of university students in the field of science, technology and engineering to better empower their youth in this field.

Suriname is ready to learn from Ghana’s experience in the mining sector. The minister of energy of Ghana was invited to Suriname and gave a great presentation on how the two countries can work together in oil and gas.

Q: Which other economic sectors is Suriname looking for cooperation on?

A: Suriname is looking for cooperation in the fisheries sector; it participated a few months ago in ACP/EU fisheries conference in Ghana.

Suriname is also interested in agricultural cooperation with Ghana since both countries have similar climate and foodstuff.

Both countries also have great tourist attractions that they can capitalize on.

Q: There is a physical distance of over 6000 kilometres between Accra and Paramaribo, the capital of Suriname. Are there plans by Suriname Airways to commence flights to Accra?

A: Suriname is looking forward to a direct flight between the two countries and there have been discussions with the Minister of Transport and Tourism on the possibility of having the national airline of Suriname flying between the two countries, as itis only 6 hours. Since Paramaribo is considerably a hub of South America, the direct flight could be very important and beneficial to both countries and the South American continent as flying will be shorter.

Q: You were a distinguished participant at the recent Ghana Trade Policy Enlightenment Summit for Foreigners, GaTPES, in Accra. What do you think of the summit? How can future editions of the summit benefit Surinamemore?

Q: At the Ghana Trade Policy Enlightenment Summit for Foreigners, GaTPES, event you called for closer relations between Suriname and Ghana, as well as other African countries, especially in the area of music, culture and tourism. What kind of relationship do you have in mind, specifically? And, what are you doing to make that a reality?

A: As an Ambassador, I look forward to creating a collaboration between Surinamese musicians and Ghanaian musicians. I intend to engage with Ghanaians, go to the different regions and exchange ideas on how both countries can share their culture with each other.

I also wish to have programs on television to inform people about the similarities between the two countries when it comes to culture, as the African descendants, especially the Maroons kept some of the cultures their ancestors used to practice; like naming ceremonies, six tribal communities with paramount chiefs and chiefs in the hinterland of Suriname.

I would also want to have functions on special days and organize Ghana-Suriname engagements, workshops, exhibitions, etc.

I intend to make use of any platform that can give me the opportunity to exchange information between the two countries.

I am looking forward to being able to organize food fairs, artistic cultural activities where Surinamese artists can come to Ghana and perform in schools and on TV.

I also intend to visit universities and have presentations about Suriname.

I would also like to have the Embassy host a Mango festival in close collaboration with Caricom Ghana community where Mango will be showcased in different forms and uses.

I make sure I take the opportunity to talk to guests about Suriname anytime I am invited to functions, my pangi (which is a symbol of Suriname) is always on my shoulder as a special symbol of my country.

I look forward to having documentaries of Suriname presented to schools and communities too.

Q: What do you intend to be your major accomplishments during your tour of duty as Ambassador here?

A: During my tour of duty, I intend to regularly inform Ghanaians about Suriname, its people, its history and also let the people know the strong connection between the two countries because of the slave trade.

I also want Suriname to become more aware of the social and economic mutual benefits of Africa.

I wish to let people know where Suriname is located as soon as they hear the name on TV.

know that Suriname is also a football nation since some players in the Netherlands national team are of Suriname descent.

Q: Your official title is' Ambassador Extraordinary and Plenipotentiary. How does that work? Kindly explain what this means practically.

A: This means I am formally representing the Head of State of Suriname, who is the President; and, I have all the power and authority to represent the Government of Suriname.

Q: What would you say are your major achievements so far?

A: My major achievement so far is knowing your company and having the opportunity to participate in your Ghana Trade Enlightenment Forum for Foreigners.

I have also been to the Volta Region where I met with the Regional Minister and got the opportunity to get people interested in Suriname google and learn more about Suriname. I will only be satisfied when I see the direct flight between Suriname, Ghana and the other African countries.

Being interviewed by you and having the opportunity to speak about my country Suriname is a great achievement for me too as there will be more people hearing and reading about Suriname.

Q: Your Excellency, kindly tell us about yourself.

A: I was born in the east of Suriname, Moengo, which is a bauxite town; and, I am a member of one of the Maroon tribes; we have 6 tribes. I belong to the Okanisi tribe which is close to French Guyana.

I served as Ambassador first in Trinidad and Tobago and then now in Ghana.

I am the founder of the Maroon Women’s Network which serves as a networking platform for development, working on awareness for social and economic benefits of the tribal communities’ sustainable development nationally and internationally.

I am also the founder of Maroon Women Chamber of Cooperation and also involved in ‘Every Girl Wins’ International Institute which was started in the United States and are starting to work here in Ghana to empower girls with their talents, regardless of their ages.

I was a senior political advisor of the Ministry of Natural Resources in the implementation of Free Prior Informed Consent in tribal communities.

Q: Your final words, Your Excellency?

A: I would like to thank Africa for allowing us to work together to make the world a better place, in using natural and human resources to make life better for everyone.

Using our talents and skills to effectively communicate, educate and empower each other and those who need it most.

Let’s work together and give peace a chance.