Three females arrested at ‘wee’ base in Kumasi 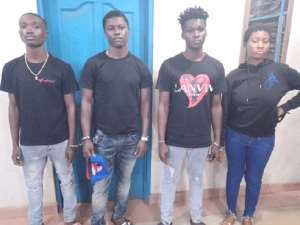 Some eight drug peddlers, including three females, have been arrested at a 'wee' base in Kumasi, Ashanti Region.

This follows a security operation by the police in Kumasi to help flush out illicit drug peddlers and users.

The unannounced security exercise was undertaken at places such as Kwadaso, Asuoyeboah and Kwadaso Estate, all within Kumasi metropolis.

According to a police report sighted by the DAILY GUIDE, the police found quantities of dried leaves, suspected to be Indian hemp or 'Ganja' on the suspects.

“A search conducted on them and surroundings led to the retrieval of pill pouches containing dried leaves and partly smoked dried leaves, all suspected to be cannabis.

“A number of transparent sachets of local gin suspected to have been laced with cannabis were retrieved,” portions of the police report disclosed.

It said one unregistered Mercedes Benz and Honda Civic, found parked at a drinking spot where suspects were arrested, were brought and impounded for investigations.

“Suspects in custody would be processed and those who will be connected with exhibits be put before the law court,” the police report concluded.

Arrest, prosecute galamsey kingpins irrespective of their s...
13 minutes ago

Ablakwa questions whereabouts of chief perpetrator of Bulgar...
13 minutes ago