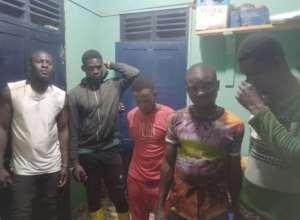 The Atwima Mponua District Police Command assisted by officers of the Ashanti Regional Command of the Ghana Immigration Service and National Security Operatives from the Greater Accra Region grabbed the suspects in a dawn operation.

One of the suspects however, managed to escape from the moving vehicle when they were being transported to the Atwima Mponua District Police Headquarters in Nyinahin, the district capital.

Isaac Kofi Marfo, the District Chief Executive of Atwima Mponua, who led the operations, said the suspects were apprehended at Mpasatia and Abompe along the Offin River.

The security personnel burnt changfan machines and confiscated other items used by the suspects in their operations.

In an interview with the media, Mr. Isaac Kofi Marfo commended the security personnel for their swift response to his distress calls.

He noted that the arrest of the suspects would in a great way deter other miners from engaging in that evil act, adding that it would also help save River Offin and other water bodies in the country from pollution.

Mr. Marfo appealed to the chiefs, unit committee members and inhabitants in the mining communities to join hands with the security services to fight the menace to help protect national assets and the environment by volunteering information to him.

Earlier, the DCE had on Saturday, August 13, 2022, held a press conference at Nyinahin to distance himself from a viral video circulating on social media, alleging that he was involved in illegal mining activities.

In the said viral video, the DCE was accused of hiring 1,000 Togolese to the area to operate illegal mining activities.

He challenged any individual with evidence of his involvement in galamsey activities along the Offin River or any other place to prove so. He accused some individuals within the NPP in the Atwima Mponua District of envying his position.

“As the chairman of DISEC, I will not sit unconcerned for galamsey activities to go on in my district. I have embarked on several operations with the security officers to curb this menace. If there is any galamsey activity anywhere, I expect the assembly members, unit committee members and opinion leaders in that area to inform me to take action,” he said.