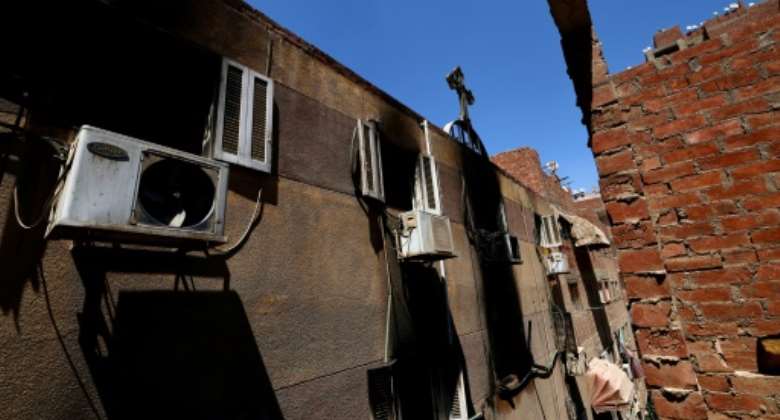 A total of 41 people died in the fire that ripped through the Abu Sifin church on August 14, 2022. By Khaled DESOUKI (AFP/File)

An electrical fire that turned a crowded Cairo church into a deathtrap highlights a persistent problem, say Coptic Christians in majority-Muslim Egypt -- a struggle to build or renovate their places of worship.

The residential-style multi-storey building housing the Abu Sifin Church where 41 worshippers died had only one exit and, like most structures in Egypt, lacked smoke detectors and alarms or fire escapes.

Its location in a maze of alleyways in the working-class district of Imbaba was part of the reason firefighters reportedly took more than an hour to arrive, during which dozens died of smoke inhalation.

Unable to escape the flames down the narrow staircase from the upper floors, some of the about 200 worshippers "threw themselves out of the windows," one witness told AFP.

"As we've seen, these are life and death matters and disproportionately affect churches in poorer areas," historian Amy Fallas, who has studied the issue, told AFP.

Egyptian mourners at the funeral of victims killed in the Coptic church fire, at the Church of the Blessed Virgin Mary in Imbaba district in the west of greater Cairo. By Khaled DESOUKI (AFP/File)

Since Sunday's disaster, two more churches have caught fire, both blazes also blamed on "power surges", though they were quickly contained and caused no casualties, according to church and official sources.

Copts are the Middle East's largest Christian community but are a minority in Egypt, the Arab world's most populous country, where they account for 10 to 15 percent of the country's 103 million people.

Christians have in the past been targeted in deadly attacks by Islamist militants, particularly after the 2013 overthrow of Islamist president Mohamed Morsi, with churches, schools and homes burnt down.

Egyptian police outside the charred Abu Sifin church located in the densely populated Imbaba neighbourhood west of the Nile river on August 14, 2022. By Khaled DESOUKI (AFP)

Such violence has eased, and Egyptian President Abdel Fattah al-Sisi, the first to attend Christmas mass every year, was quick to offer his condolences Sunday to Pope Tawadros II, head of the Coptic Orthodox Church.

With world attention on the tragedy, a presidential decree was issued for the Armed Forces Engineering Authority to renovate the charred church.

In the aftermath of the disaster, Tawadros II said on national TV that Copts often pray in "small, inadequate churches", and that the Abu Sifin Church measured "only 120 square metres" (about 1,300 square feet).

The pope said Copts had often faced bureaucratic hurdles in obtaining permits to build and repair churches, "a very cumbersome process", but he was careful to clarify this had been the case until "over a decade ago".

President Abdel Fattah al-Sisi alongside Pope Tawadros II during a Coptic Orthodox Christmas Eve mass at the Nativity of Christ Cathedral in Egypt's administrative capital east of Cairo on January 6, 2022. By - (EGYPTIAN PRESIDENCY/AFP/File)

A 2016 law to improve the process has been lauded as a breakthrough by authorities. By last year, 1,077 churches had been recognised as legal places of worship, according to a cabinet statement that hailed Egypt's "unique model of interfaith coexistence and national unity".

Father Yohanna, of Cairo's Great Saint Anthony's Church, told AFP that the process to build and renovate churches, once difficult, had indeed "become smooth" since 2016.

But the priest -- who lost six relatives in Sunday's fire, including three children -- also said that places of worship still require better inspections to avoid more such tragedies.

The multi-storey building housing the Abu Sifin Church where 41 worshippers died had only one exit and, like most structures in Egypt, lacked smoke detectors and alarms or fire escapes. By Khaled DESOUKI (AFP/File)

Critics say the state's legal push in the name of "national unity" in fact stigmatises complaints of discrimination as "anti-patriotic", as Fallas argued in a paper for the Tahrir Institute for Middle East Policy.

The Egyptian Initiative for Personal Rights (EIPR) says authorities have conditionally approved fewer than 40 percent of requests to build or repair churches since 2016, with only 20 percent granted final approval.

A fire in 2016 that destroyed the Church of Saint Joseph and Abu Sifin in Ezbet Faragallah in Minya, south of Cairo, has been described by some as a "deliberate act", according to the group.

The church submitted a request to rebuild the house of worship after it was demolished in 2021, but has received no response so far.

Funerals were held in two Cairo churches for victims of the fire that forced some worshippers to jump out of the building's windows. By Khaled DESOUKI (AFP/File)

Nine Coptic Christians who held a small protest demanding the church be rebuilt were detained for three months and released in January.

Pope Tawadros II, in the aftermath of Sunday's fire at the Abu Sifin Church in densely populated Imbaba, meanwhile called on state officials "to move the church to a more spacious area".

Father Yohanna, however, said proposals to relocate it to an outer district are "not practical" for the local Christian community, arguing that "places of worship must be close to residential areas".