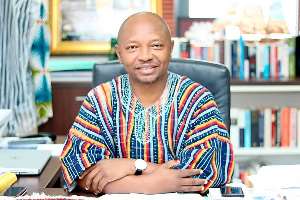 He will be surprised, according to him, if the Speaker of Parliament, Rt. Hon. Alban Kingsford Sumana Bagbin pardons her after her long absence from Parliament since December 2021.

Speaking on the Pulse show on the Accra-based Joy News channel on Tuesday, August 16, monitored by Modernghana News, he expressed confidence the Speaker will make the best decision.

“I will be in utter shock if the Speaker pardons her. It will be the nail in the coffin for the little confidence we have in Parliament as an institution.

“I am confident that the Rt Hon. Speaker will come out with a decision that is best for the country. Clearly, Adwoa Safo has demonstrated a lack of commitment and principle to the country,” he said.

This comes after Done-Kwabenya (MP) said in response to her dismissal as Minister for Gender, Children, and Social Protection that it will now allow her to focus on her parliamentary duties and aid the NPP's quest to "break the 8."