C/R: Teenage boy drowns after bragging to friends he can swim at Nkwanta 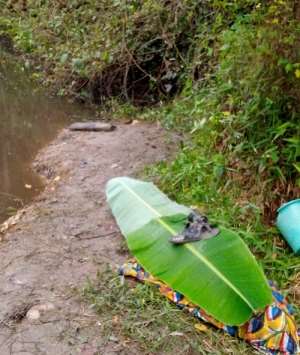 The family of a teenage boy in Nkwanta in the Mfantseman Municipality of the Central Region is currently mourning his death after drowning.

Kwesi Akuffo-Addo, age 16, is reported to have had an argument with some friends that he is a good swimmer.

Following a visit to the Brafor stream, he is said to have jumped into the water to prove to his friends that he can swim.

Unfortunately, he drowned in the Brafor Stream and died.

The incident according to checks happened on Monday, August 15, an hour after midday.

Early attempts to retrieve the body of the drowned teenager proved futile until the Chief of the area, Nana Essandoh was contacted.

Subsequently, a libation was poured before the lifeless body of the teenager was found.

Amid mourning from family members and residents, his body has been conveyed to the Saltpond Government Hospital Mortuary for preservation and autopsy.

E-Levy: Gov’t determined to behave like a vampire to suck th...
59 minutes ago

Gov’t will hide behind IMF discussions to force more hardshi...
59 minutes ago