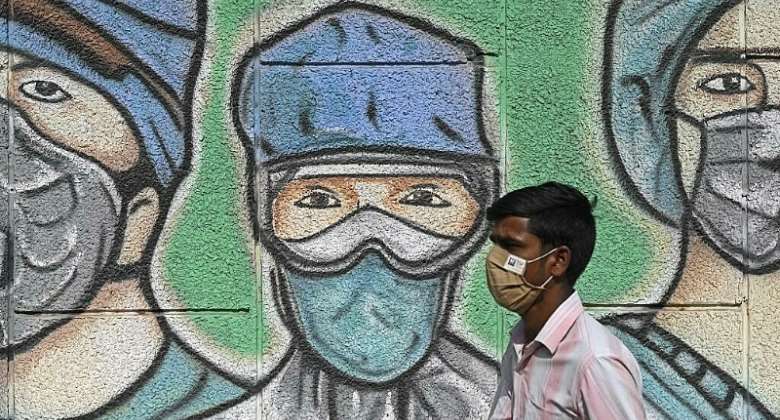 People in New Delhi have been obliged to wear masks once again after Covid-19 infections rebounded in the bustling capital where last year's deadly Delta surge killed thousands and overwhelmed the city's healthcare services.

“People caught without masks in public in the Indian capital will have to pay a fine of 500 rupees (6.2 euros),” the local government said after reimposing the mandate. This was despite the failure of a similar order in April to improve compliance in the city of 20 million.

Commuters travelling in private vehicles without masks were exempt from the fine, which is a fourth of the penalty handed down for similar offence a year before the onset of the catastrophic Delta wave in 2021.

The authorities said they have set up squads of inspectors to enforce the order as cases surged in the capital, where the pandemic has so far killed more than 26,000 residents and sickened 200,000 others by an official count.

Before this, the city logged over 2,000 new infections daily for 12 straight days, local media said.

But last Thursday, it reported 2,726 infections, the highest in six-and-a-half months in the city, where several markets have started urging shoppers to follow health protocols and use masks.

The positivity rate, which defines the percentage of people diagnosed Covid positive of those overall that have been examined, has also been on the rise, a government health bulletin added.

“The cases are indeed rising but they are mild in nature. We are keeping an eye on it and will take necessary steps that are required,” city Chief Minister Arvind Kejriwal told reporters.

“We now have more than 7,500 active cases in the city but a large number of them are in home isolation,” a health official told RFI, adding that hospitals were geared up in case the numbers again grow.

Only 600 of 9,400 city hospital beds set aside for those infected by the virus were presently occupied. “But we want to take no chances and hence we hope people will start reusing face masks.”

Maharashtra reimposed the mask mandate in June following an uptick in the number of cases in the western Indian state while the restriction was back in place in four districts of Haryana state and now in Punjab.

Chandigarh, a federally ruled region, has also ordered masks in public places while several other states where Covid cases have dipped have dropped the regulation.

National aviation regulators, however, have made health masks compulsory for air travel as well as in airports with a warning people would have to dig into their wallets for violating the rule.

The country reported 54,386 infections in the past week, taking the cumulative tally to 44.3 million infections and 527,000 deaths by official estimates but experts say the numbers are an undercount.

Christophe Guilmoto, a French population scientist based in Delhi,  has pegged India's Covid-19 mortality at between 3.2 million and 3.7 million by November last year when the official national virus death toll was 459,000.

Toronto-based epidemiologist Prabhat Jha has also put India's Covid toll at 3.2 million while the Lancet medical journal has suggested the real numbers are eight times higher than the official figure.

India has rejected the reports as fallacious and ill-informed.