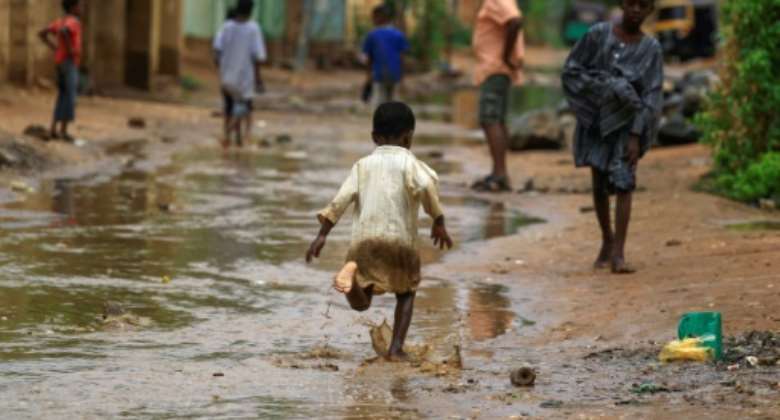 A boy runs through floodwater after a downpour in Sudan's capital Khartoum on August 13, 2022. By ASHRAF SHAZLY (AFP)

The death toll from flooding triggered by torrential rains in Sudan has risen to 75 and destroyed or damaged tens of thousands of homes, police said on Tuesday.

"The number of people killed by the floods rose to 75, and left 12,551 houses completely destroyed, and another 20,751 partially damaged," a National Council for Civil Defence statement said.

It also said that around 30 people had been injured.

Heavy rains usually fall in Sudan between May and October, and the country faces severe flooding every year, wrecking property, infrastructure and crops.

The eastern state of Kassala, North and South Kordofan state, River Nile state, and South Darfur were among the most badly affected, according to the United Nations.

On Sunday, the UN Office for the Coordination of Humanitarian Affairs (OCHA), citing government figures, estimated that around 136,000 people had been affected by rains and flooding since this year's rainy season began.

It also said the number of people and localities affected as of August 14 "has doubled" compared with the same period last year.

About 314,500 people were affected across Sudan during the entire rainy season in 2021, according to OCHA.

External factors stripped off gains Akufo-Addo gov’t made in...
30 minutes ago