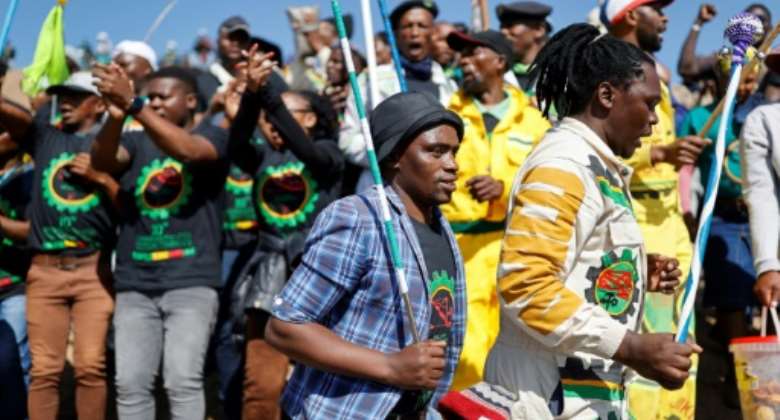 Thousands gathered at the hillside where the massacre unfolded 10 years ago. By Phill MAGAKOE (AFP)

Thousands of people gathered in the South African town of Marikana on Tuesday to mark a decade since dozens of striking workers were killed in the worst act of police violence since the end of apartheid.

On August 16, 2012, 34 people were killed and 78 injured when police opened fire on platinum mine workers who had gathered on a hill near the mine to press demands for better wages and housing.

On Tuesday, some danced and sang songs while brandishing sticks near the site of the massacre, around 100 kilometres (60 miles) northwest of Johannesburg, according to AFP reporters at the scene.

Many miners wearing mining union T-shirts were in attendance, along with opposition officials.

An official inquiry placed much of the blame for the deaths on police tactics, finding that an operation to remove the miners should not have gone ahead.

It cleared senior government officials of any culpability.

President Cyril Ramaphosa, who at the time was non-executive director at Lonmin, which operated the mine, was also exonerated.

No one has been charged over the massacre.

Aftermath: Police forensic experts at work the day after the massacre. A decade later, no-one has been charged over the deaths. By - (AFP)

The Independent Police Investigative Directorate, a police watchdog, said the incident is still under investigation.

Authorities have said they are still finalising dozens of compensation claims, having already paid almost 76 million rand ($4.6 million) to the victims' families.

Wages in the mining sector have increased by 86.5 percent since 2012, the Minerals Council South Africa, an industry group, said in a statement, adding the companies have worked to ensure that the events of Marikana "never happen again."

Where are DISECs in this whole galamsey brouhaha – Otumfuo q...
3 minutes ago

Akufo-Addo announces plan to establish Tourism and hospitali...
3 minutes ago