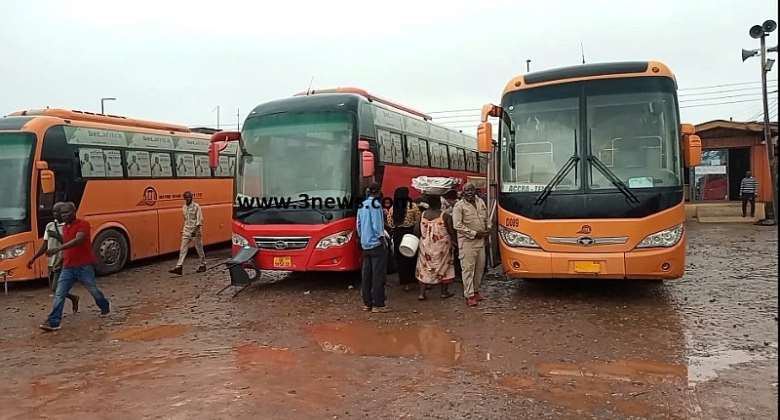 An near standoff between transport operators at the Metro Mass Transit terminal in Takoradi in the Western Region, on Monday, August 15 was averted after city authorities stayed an operating permit to a new transport operator.

According to the eight transport operators, the permit violated existing protocols as already “STMA made it clear that it will not allow any transport operator already registered with another assembly to operate in the metropolis”.

However, when 3news.com got to the MMT bus terminal Monday morning, the only buses there were from the Metro Mass Transit and other vehicles of already existing transport operators.

There was no sign of Bimbisalah Cooperatives. Passengers oblivious of what might have happened in the morning, were in queues buying tickets for their journey.

Already, two Kumasi-bound MMT buses had left. Other transport operators were also busily loading from another end of the terminal.

Western Region Manager of Metro Mass Transit David Teye Tekutey, in an interview, stated that there has not been any official communication to them on why Bimbisalah Cooperatives did not start operations.

Nevertheless, he insisted that their position not to allow Bimbisalah Cooperatives to operate with them is non-negotiable.

“So far, we have heard nothing. But we want to believe that maybe the city authorities heard us through the press conference and have decided to act right. We are here and we will not change our minds. This is government business and if STMA wants to collapse it, then that will be a matter for our top management and the Transport Ministry to decide on. But we all know the kind of relief MMT gives to many people and so we are clear in our minds that we will continue to operate without any disturbances.”

Western Region Chairman of the Ghana Private Roads and Transport Union (GPRTU) Joseph Cudjoe shares the same sentiments and warned of dire repercussions if Bimbisalah Cooperatives is allowed to operate.

“We heard the regional minister on radio saying he has spoken to the owner of Bimbisalah Cooperatives and he has said he is changed. How can the minister do that? The ideal thing is for the Minister to call all of us to a meeting, get the guy to sign a bond of good behaviour and other things. But that has not happened. This morning, his first bus at Apremdo has already left. He is operating well in EKMA, what again does he want here in STMA?” he asked

Even though Mr. Cudjoe will not disclose what GPRTU's response would have been had Bimbisalah Cooperatives started operating, 3news.com is informed that GPRTU and the other transport operators had planned not to operate.

Highly placed sources at STMA tells 3news.com that the Assembly has asked Bimbisalah Cooperatives to hold on with their coming.

Deaf Association calls for deaf-friendly curriculum for deaf...
13 minutes ago

‘Something is wrong somewhere’ — Otumfuo wonders why galamse...
13 minutes ago