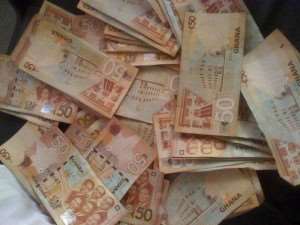 The value of a currency, in my opinion, is one of the important factors in determining the performance of an economy. It determines import and export levels, the type of external investment an economy attracts, interest rate differentials, and the prices of goods and services.

When a currency falls in value, imports become more expensive and exports become less expensive. Some countries deliberately devalue their currencies in order to lower the cost of their exports.

According to Bloomberg, the Ghana cedi has depreciated massively, becoming the worst performing currency in Africa. As of August 8, 2022, the cedi had depreciated by -28.82% against the dollar.

The current economic difficulty is largely influenced by the cedi's performance, as well as other factors such as an over-reliance on the service sector as a key economic driver, excessive government spending, a "dollarized" economy, corruptions related activities and a lack of a strategic economic focus.

To restore the cedi depreciation cycle and improve the country's economic woes, the government of Ghana must continue with its industrialization agenda, add value to the country's exports, increase local production, and reduce imports in order to have enough foreign exchange in the economy.

The government's policy of modernizing agriculture through one-district-one-factory is a brilliant initiative that should be given the necessary strategic focus to improve the country's industrialization drive. When the one-district-one-factory policy is properly implemented, the country's economic structure would shift to a manufacturing-driven one, resulting in a reduction in consumable imports. It should be noted that the majority of the country's import trade is conducted in dollars, putting significant pressure on the Ghana cedi. The net result of industrializing an economy is a decrease in inflation, particularly food inflation.

The managers of the Ghanaian economy must put in stringent measures in checking the “dollarization” of products and services in the country. Today most real estate companies price houses in dollars, some hotels price their services in dollars, government agencies like the National Lottery Authority charge in dollars for permit to run lottery promotions, commercial activities are traded in dollars, etc. There is already a law prohibiting such activities, and the government must strictly enforce it. More importantly, Bank of Ghana must make the operation of foreign currency account more expensive to check the stacking up foreign currencies by foreign account holders. This move will achieve a cedi driven economy if such a policy is implemented and monitored well.

In addition, the government should take steps to boost investor confidence in the Ghanaian economy, such as cutting government spending to meet revenue targets. How can the government accomplish this? It must reduce the number of government appointees across all sectors, conduct regular payroll audits to identify ghost and unapproved employees on government payroll, and be more proactive in combating corruption. The country's current taxation system must be closely monitored for leakage.

If the outlined measures are implemented with the necessary political will, I believe it will send a positive signal to the investor community about the government's willingness to change the country's economic fortunes, which can influence the economy's rapid turnaround.