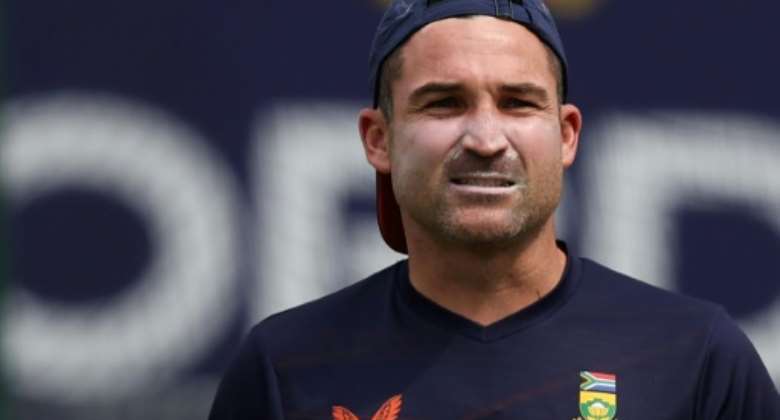 South Africa captain Dean Elgar takes part in a practice session at Lord's ahead of the first Test against England. By Adrian DENNIS (AFP)

South Africa captain Dean Elgar says he does not fear "Bazball" as the Proteas seek to inflict England's first Test defeat of their swashbuckling new era under the leadership of Ben Stokes and Brendon McCullum.

After a dismal run of just one victory in 17 Tests, England have won four from four under new skipper Stokes and coach McCullum heading into their series opener against South Africa at Lord's on Wednesday.

That includes a 3-0 series win over world champions New Zealand, with England hunting down challenging targets on each occasion.

Stokes's men then made light of a seemingly stiff target of 378 in the Covid-delayed fifth Test against India at Edgbaston, romping to victory by seven wickets.

"Bazball" -- a reference to McCullum's nickname -- has revitalised England's red-ball fortunes at a time of renewed debate about the future of the five-day game.

But there are questions over whether the ultra-aggressive approach can work in all circumstances, particularly against a strong South Africa pace attack.

"I've got absolutely no interest in the style that they've played," Elgar told the Guardian. "I think it can go one of two ways for them and it can go south very quickly... I'd like to see them do it against our seamers."

But England bowling great James Anderson, speaking at Lord's on Monday, is confident that sticking with a positive mindset will prove the right thing for the team.

"If we keep playing with that entertaining sort of mindset and also be smart with it as well... there may be times when we can't go hell for leather with the bat and maybe we have to soak up a bit of pressure at times and just be smart about when we put pressure back on the opposition.

"I think that's the biggest learning from the last four Tests we've played, that we can be smarter at times."

Both teams appear to be stronger in bowling rather than batting although, with resilient opener Elgar leading from the front, the Proteas have won seven out of nine Tests under his captaincy, while the form of Keegan Petersen has helped compensate for the red-ball retirement of gifted shotmaker Quinton de Kock.

England will hope in-form batsmen Joe Root and Jonny Bairstow maintain their eye-catching form of earlier in the season.

South Africa spearhead bowler Kagiso Rabada is doubtful for the first game of the three-Test series with an ankle injury.

"I'm hoping that he pulls through," said Proteas coach Mark Boucher. "Rabada is a massive player for us as we all know so for him to be part of the final XI would be very special for us."

Boucher said his men were relishing their chance to write their names into Lord's folklore.

"Just watching the players' reaction walking into Lord's, there's a lot of passion and emotions are running high in a good way," he said.

"They want to be a part of hopefully creating something special and become a legend in the game like a lot of cricketers in the past have been."

"I've been itching to get back in the dressing room to be honest," said the 40-year-old, who has played 172 Tests since making his debut in 2003.

"Those four Tests (against New Zealand and India) were incredible. Obviously what we did on the field was great, but the energy in the dressing room was brilliant.

"I felt as happy as I have done in an England dressing room for a number of years so the last five weeks I've just been itching to get back in there."