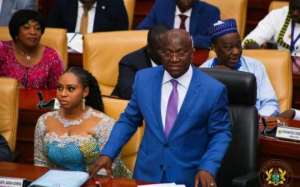 The Majority Leader in Parliament, Hon. Osei Kyei-Mensah-Bonsu has insisted that Sarah Adwoa Safo, cannot hold herself as Member of Parliament for Dome Kwabenya again following her long absence from her post.

He noted that it is a constitutional imperative for the seat to be declared vacant by the Speaker once she failed to appear before the Privileges Committee.

Speaking in an interview on Otec FM's afternoon political talk show dubbed ‘Dwaberem’ on Monday August 15, 2022, the MP for Suame constituency said, “the vacancy is automatic since Adwoa Safo, the MP for the constituency, despite several opportunities afforded her, failed to appear before the committee to explain why she was absent for more than 15 consecutive sittings.”

Mr. Bagbin, on July 28, 2022, deferred for further study a decision on Adwoa Safo’s fate regarding her absence from the House for more than 15 sittings without the written approval of the Speaker.

The Privileges Committee of Parliament, by a majority decision, recommended the New Patriotic Party (NPP) MP’s seat be declared vacant, intimating that, “the Dome-Kwabenya seat is automatically vacant by operation of law.”

The committee said by the provisions of Article 97 (1) (c) of the 1992 Constitution, the onus was on Sarah Adwoa Safo to provide a reasonable explanation to the Privileges Committee on why she shall not vacate her seat, for having absented herself for 42 sittings of a parliamentary session.

But according to Hon. Osei Kyei-Mensah-Bonsu, the constitution is clear on what should happen to a lawmaker who absents himself or herself from parliamentary sittings without permission and also fails to avail him or herself to a process to deal with the situation.

He accused the Minority of reframing their position on the matter of Dome-Kwabenya MP and frequently “shifting the goalposts” as a way that may make it easier for them to claim a face-saving victory.

“The Minority keeps shifting the goalpost on this matter. When the Speaker ruled and referred the matter on 5th April, the Minority Chief whip rose and said he disagreed with the Speaker.

“His disagreement was that the Speaker could not, on his own, refer that matter to the Privilege’s Committee. That was the position he took initially. I said I disagree with him, [and that] the speaker can do that,” he told the programme’s host Doctor Cash.