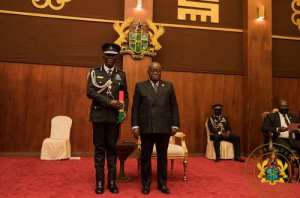 The President of the Republic, H.E Nana Addo Dankwa Akufo-Addo has expressed his delight the direction the Ghana Police Service is heading under IGP Dr. George Akuffo Dampare.

According to the President, it is clear steps are being taken by the Police Service to respond adequately to the security needs of the country.

“This service is part of the transformational agenda in positioning the service to become one of the best institutions in the country and a modern institution for the rest of the world. This bold initiative is seen to regain the confidence and trust of the public and has the full backing of the government.

“The institution such as the Police Service needs to reconsecrate itself to respond adequately to the security needs of the country and Ghanaians are witness to the pragmatic steps being taken by the service in this regard,” H.E Nana Akufo-Addo said on Monday, August 15.

The president added, “The government is very much aware of the efforts of the service under the leadership of the Inspector General of Police, members of the police management board to intensify targeted operations to combat violent crimes.”

While delivering an address during a handing over of motorbikes to the Police Administration at the National Operations Centre at the Police Headquarters, H.E Nana Akufo-Addo assured that his government will do its part to help the service in the direction it is headed.

Since becoming the IGP in 2021, Dr. George Akufo-Addo Dampare has earned a lot of commendations for leading reforms in the Police Service.

He has vowed to change the perception that the Police Service is the most corrupt public institution in the country.