'Let's sacrifice for NDC to defeat NPP in 2024' — Former Chairman 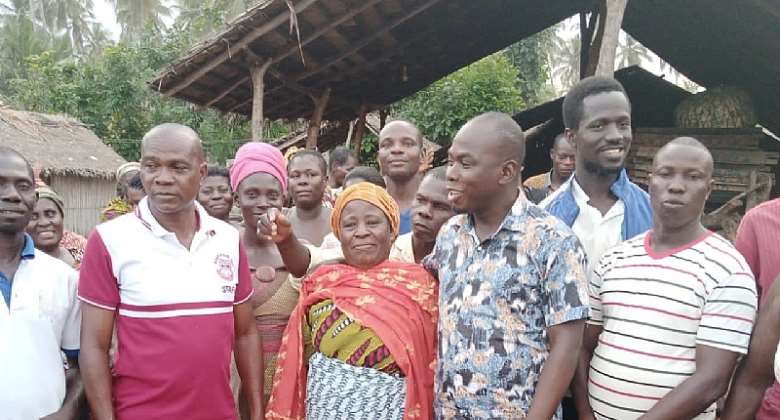 The former National Democratic Congress (NDC) chairman of Jomoro Constituency in the Western Region, Mr. Gideon Koniba has appealed to the new branch executives of the party to sacrifice their resources and energies to help the NDC recapture political power from the governing NPP in 2024.

The former NDC's chairman made the call at Newton fishing community over the weekend where he met the newly elected branch executives of the party to congratulate them on their successful elections.

Addressing the branch executives and other members of the party, Mr. Gideon Koniba charged them to bury their differences and work together as one family to retain the Jomoro Parliamentary seat in 2024.

He also charged them to work harder to increase the presidential votes of the party come 2024.

"Let me use this opportunity to congratulate you on your victory, in fact it is not easy to contest in any election and win so you have done well. Now that you have been elected as the branch executives, your mandate is to work harder for the party to win more souls for the party so I will charge you to work together as one team to retain the Jomoro Parliamentary seat and increase the presidential votes of the party come December 7th 2024", he said.

The former Chairman tasked them to sacrifice for the party to be attractive ahead of the elections 2024.

"You should know that the party does not pay branch executives and any executives, all you should know is that sacrifice, I will urge you to sacrifice your resources and energies for the great NDC to defeat NPP in 2024 and I know what when NDC comes to power in 2024, you will be rewarded, sacrifice goes with reward", he stated.

He emphasized that "let us be mindful of our comments on social media especially mixed platforms ahead of the constituency, regional and national elections so that we don't create division in our great party which is poised for victory in 2024".

Mr. Gideon Koniba took the opportunity to declare his total support for former President John Mahama to lead the party as its presidential candidate ahead of the 2024 general elections.

He, therefore, urged them to rally behind former President John Mahama to recapture political power from the governing New Patriotic Party (NPP) for the NDC in 2024 as well.

He stated that the NPP government led by President Akufo-Addo and Vice President Bawumia has collapsed the country's economy.

Ahead of the constituency elections, Mr. Gideon Koniba urged the various aspirants to concentrate on their campaign messages than engage in personal attacks and acrimonies.

He further promised to support the party financially to retain the Jomoro Parliamentary seat and increase the presidential votes of NDC ahead of the 2024 general elections.

Some of the branch executives who engaged the media commended the party members for electing them to steer the affairs of the party for the next four years.

They promised to respect the rules and regulations of the party and commit their resources and energies to recapture political power in 2024.

They also pledged to work tirelessly with defeated candidates to make the party formidable in the area.

They, therefore, took the opportunity to commend the former Chief Executive Officer (CEO) of Ghana Gas Company, Dr. Sipa Yankey for supporting the NDC in Jomoro financially to recapture the Jomoro Parliamentary seat in 2020.

E-Levy: Gov’t determined to behave like a vampire to suck th...
40 minutes ago

Gov’t will hide behind IMF discussions to force more hardshi...
40 minutes ago