On the 75th anniversary of independence, Hindu nationalism gains support among India’s youth 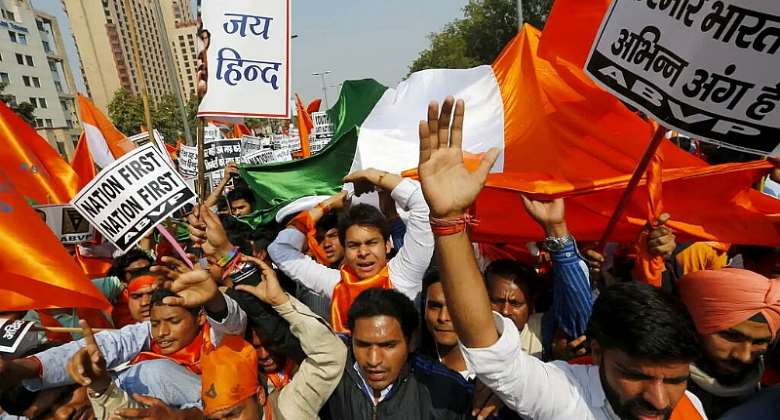 As India marks its 75th anniversary of independence from the British empire this Monday, the secular foundations laid down by the liberal founders of the world's largest democracy are being shaken by the rise of Hindu nationalism among the country's youth.

India has the largest youth population in the world with around 66 percent of its nearly 1.4 billion populace below the age of 35.

Nearly 40 percent of the country is aged 18 to 35 years, defined as youth in the National Youth Policy.

Yet, India's youth is complex, many-layered, diverse, often carrying the remains of the past and clinging to traditions, and yet wanting to forge ahead, according to multiple surveys.

The big question dominating many youths on India's 75th Independence Day is whether secularism is dying a slow death, or, at least, has ceased to exist in its spirit in state-society dealings.

Hindu nationalism has been gaining strength during the eight-year rule of Prime Minister Narendra Modi, calling into question India's secularist tradition and commitment to diversity.

According to a recent survey conducted by the Centre for Policy Research and YouGov, "as democracy ages and demography gets younger, a new generation is changing the rules. The distress is fading out, the grit is giving way to élan and anxiety to creativity while hope stays.

“The 'personal' is political for more and more Indians, and they are ready to redefine politics and policy [in tandem with] personal and national prosperity. It is this Indian who will shape the next 75 years.”

After independence, the country's first prime minister, Jawaharlal Nehru, advocated for an Indian brand of secularism designed to hold the country's disparate communities together.

He often pronounced that India's composite culture was one of its greatest strengths.

However, the ruling Bharatiya Janata Party (BJP) and its various ideological affiliates have consistently harboured a starkly different view where they envision India as a majoritarian nation-state – not a multicultural one.

“I am not religious but I want a strong leader who will take the country forward. If Hindu nationalism is the answer, then I am a supporter,” Surekha Vij, a college student from Lucknow told RFI.

Also speaking to RFI, Vishwa Mohan, a 21-year-old student in Mumbai said: “My generation is less ritualistic in their religious practice but Hinduism allows me to be practical”

“I am not opposed to other religions but we are seeing movements that threaten India and that is why we want a strong country.”

Modi's muscular nationalism fits this narrative of a huge swathe of the youth population who want to work for the nation the way he does.

But working “for the nation” can mean “othering” those they see as outsiders.

Political commentators feel the old liberal order is struggling in the face of rising ethnic nationalism undermining the country's standing as the world's largest democracy and raising doubts about its future as a secular state.

In his recent book 'What Millennials Want', author Vivan Marwaha documents the aspirations and anxieties of these young people, numbering nearly 440 million, in 13 Indian states.

What Marwaha found was the Indian generation seems to have very modern material aspirations but subscribes to paradoxically conservative positions on social and cultural issues.

“With millennials leading the charge, Indian politics has gone through a fundamental reordering: young voters want leaders who speak, pray, and look like them,” Marwaha said in an interview.

Religious minorities account for roughly 20 percent of the country's nearly 1.4 billion people, who include about 200 million Muslims and 28 million Christians.

Many believe that beneath the country's supposed inclusivity runs a strong undercurrent of Hindu nationalism.

Attempts by right-wing Hindu nationalists to portray one as the political, cultural and historical 'other' have had astounding electoral success for the BJP in many state elections.

Eminent historian Romila Thapar, who has studied the subject closely said the idea of nationalism hinges on the emergence of a new national identity in which the identity of a secular citizen has primacy over the previous identities based on religion, caste or language.

"Nationalism, particularly when religious, is not heritage itself, and yet it uses heritage all the time in myriad, and sometimes insidious ways,” Thapar told RFI.

Boos at Akufo-Addo: Someone failed and caused this monumenta...
11 minutes ago