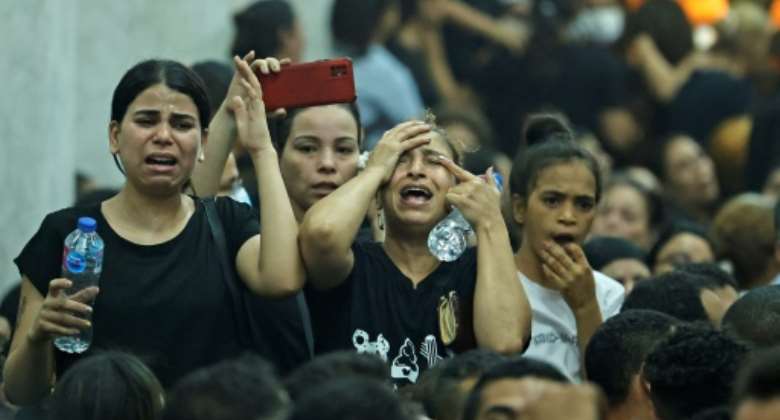 Mourners at the funeral of victims killed in Sunday's Coptic church fire in the Imbaba neighbourhood of greater Cairo. By Khaled DESOUKI (AFP)

Egyptians voiced outrage Monday over reports that firefighters and paramedics took over an hour to respond to a blaze that tore through a Coptic Christian church and killed 41 people.

Grief has spread over Sunday's fire among Copts, the Middle East's largest Christian community, which makes up at least 10 million of Muslim-majority Egypt's population of 103 million.

But many other Egyptians have also voiced outrage over the disaster in the now scorched Abu Sifin church, located in the greater Cairo neighbourhood of Imbaba west of the Nile River.

As debate flared on social media, one Twitter user charged that the reportedly slow response time "is not just negligence, it's complicity".

"My cousin's children died," video creator Moha El Harra said in a widely shared online livestream after Sunday's blaze, which was blamed on an electrical fault.

"I'm from the area. I know that the ambulance could have been there in three minutes. It took them an hour and a half.

"All we want is justice -- for the local ambulance authority, the fire services, civil defence. All of them need to be held to account."

Funerals were held in two Cairo churches for 41 victims of the fire that ripped through a Coptic Christian church during Sunday mass. By Khaled DESOUKI (AFP)

Health Minister Khaled Abd el-Ghaffar had declared Sunday that "paramedics were informed of the fire at 8:57 am" and the first ambulance "arrived at the site at exactly 8:59 am".

But many challenged this, with eye-witnesses saying it took "an hour and a half" for emergency services to arrive.

"No, the ambulance did not arrive within two minutes," one local resident, Mina Masry, told AFP. "If the ambulance had come on time, they could have rescued people," he added, stressing that many lives were lost to smoke inhalation, not burns.

A statement from the public prosecutor's office confirmed that asphyxiation caused all of the 41 deaths as the corpses bore "no other visible injuries".

Another local witness, Sayed Tawfik, said that, as the inferno raged, some panicked people inside "threw themselves out of windows to escape the fire".

He pointed to a car parked on the street with a deep indentation which he said was "left by a person who is now lying in the hospital with a broken arm and back".

Residents said bystanders braved flames and smoke to save children from the burning building.

"Everyone was carrying kids out of the building," said Ahmed Reda Baioumy, who lives next to the church. "But the fire was getting bigger and you could only go in once or you would asphyxiate."

The public prosecutor's office said that asphyxiation caused all of the 41 deaths as corpses bore "no other visible injuries". By Khaled DESOUKI (AFP)

Slow response times of emergency services are not unusual in Egypt, where neighbourhood residents routinely improvise rescue efforts, even within the megalopolis of Cairo.

Smoke detectors and alarms and fire escapes are rare and in many areas, such as Imbaba, warrens of narrow roads make it hard for fire engines to reach disaster sites.

Baioumy, the neighbour, told AFP that firefighters were hampered by the church's location "on a very narrow street".

Most recently, a church went up in flames a week ago in the eastern Cairo district of Heliopolis, though no deaths or injuries were reported.

Egyptian police gather outside the Abu Sifin church after the blaze blamed on an electrical fault. By Khaled DESOUKI (AFP)

Because the Coptic church fire happened during Sunday mass, when local families flock to the church and its daycare services, children were among the victims.

Though officials have not confirmed how many minors died, AFP correspondents at the funeral Sunday night saw several child-sized coffins.

Local media published a list from the Imbaba Hospital listing the names of 10 people killed who were aged under 16.