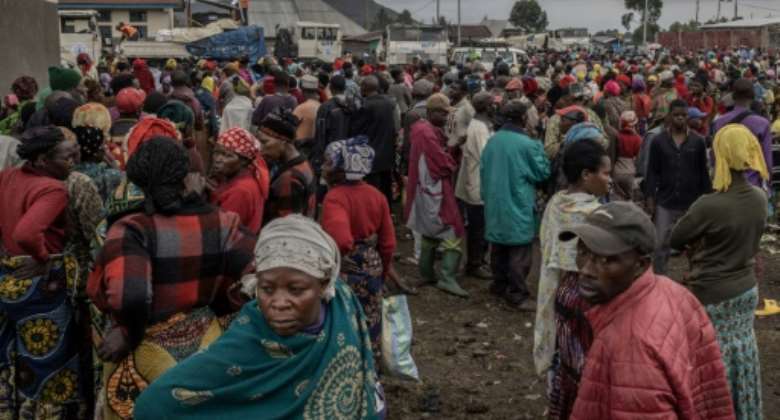 An estimated 200,000 people have fled their homes since the M23 armed group resumed fighting. By Guerchom Ndebo (AFP)

When fighting broke out near his home in eastern Democratic Republic of Congo, Furaha Nyimutozo fled for his life.

Now, weeks later, he says he has a bleak choice: "starving to death or going back to our fields to harvest the food and risk getting shot at by the rebels."

Nyimutozo is one of hundreds of thousands of people whose lives have been turned upside down since a long-dormant armed group called the M23 resumed fighting last year.

Its campaign has triggered both a humanitarian crisis and a tense political showdown. The DRC accuses its Rwanda of abetting the militia -- an allegation that Kigali denies.

According to the UN refugee agency UNHCR, 200,000 people have fled their homes.

Most of the displaced live with families who have taken them in, said Blaise Ngoy, the UNHCR spokesman in North Kivu district, which borders Rwanda and Uganda. The agency itself was taking care of another 4,000 families, he added.

The UN's humanitarian aid coordinating agency, OCHA, had already recorded 900,000 internally displaced people in the DRC up to the end of June.

Thousands have found a haven at the Rugabo sports stadium in Rutshuru.

Huge white tents bearing the UNCHR blue letters are set out inside the venue, which in better times hosted football matches.

Now, 1,500 families are housed there, in tents that each take in more than 40 families -- a unit that means two parents and four children on average.

The stench of woodsmoke from cooking is heavy in the air.

Feeding the people is no easy task, said Pierre Atchom, the agency's head in Goma.

He told AFP the agency needed $225 million to handle the deep and wide-ranging crisis in eastern DRC.

"To date, we have 43 million. The needs are enormous," he said, adding with regret that the situation failed to get the media attention of the Ukraine war.

If the agency was forced to pull out of the region, the consequences would be disastrous, said Atchom.

Families at the site said they were struggling to make ends meet with what the UNHCR was able to provide.

But they shuddered at what would happen if the agency had to withdraw.

Rutshuru is the epicentre of the latest bloodshed to hit DR Congo. By Tupac POINTU (AFP)

"If you have a family, it's a real struggle," said Julienne Nyiramana, a mother of four. "We are asking for help so that we can return to our villages."

"If the UNHCR can no longer help us, we will be wiped out by hunger," said Emmanuel Hakizimwami, 35, a father to four children.

"In our village, my children ate three times a day at least -- here's it's hard to get just one meal a day," said Antoinette Semucho, a 25-year-old mother of two, who was in tears.

But the M23 rebels occupy her village. For now, there is no going back

"What is going to become of us if there is no longer anything" from the UNHCR, she asked.

A mother with her malnourished child speaks with a doctor at Rutshuru Hospital. By ALEXIS HUGUET (AFP)

In the stifling heat, Innes, 10, plays with her brother. The child is so scrawny that under her ragged black blouse, her bones show through her skin. Other children also show similar signs of malnutrition.

It is a similar story at the village of Ntamugenga, which lies in a valley overlooked by a hill held by the M23.

Here, 7,200 families are spread out over four sites.

The front line is just 500 metres (yards) from the village -- banana fields are all that separate the Congolese army from the rebels.

But anyone who dares to go into the fields to forage for food is risking their life.

"For the rebels, anyone who approaches the fields is considered a soldier or informant and therefore is a spy," said the village chief, Celestin Nyamugira. "They often they shoot without warning."

Esperance, a 32-year-old mother of three, told how she and three other women had tried to find food there.

"The rebels took what we had gathered and whipped our breasts," she said.

My wealth exaggerated; it’s crass to define me by my wealth ...
28 minutes ago

We need peace in Bawku, we cannot make our children inherit ...
28 minutes ago