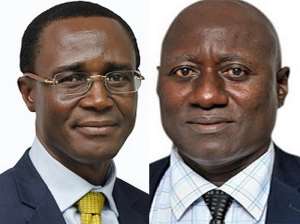 The Ghana Revenue Authority (GRA) has officially reacted to the report by the Office of the Special Prosecutor (OSP) citing the Customs Division of GRA and Labianca Company Limited of corruption resulting in loss of revenues to the state.

In a lengthy release, the GRA says the comments passed by Commissioner of the Customs Division, Col Kwadwo Damoah (rtd) are his personal views.

Col. Damoah last week lambasted the Special Prosecutor Kissi Agyebeng over the content of his report on the Labianca case where over GHS1 million have been recovered in unpaid import duty.

The Commissioner of the Customs Division describes Kiss Agyebeng as ‘small boy’ who wants to bring him down.

"Anybody who has read that report very well, would know that basis of that and luckily for me, God is always on my side. Before that report came, that person had made statement to some people who had come (to tell me that), he was going to publish something that will discredit me and he will do that and I even sent people to go and tell him that he's a small boy and I am older than him.

“I have lived a meaningful life and if he attempts to destroy me, it won't be easy for him. People have tried it, I have survived and this one too I will survive," Colonel Damoah said

Reacting to the comments that have been described as emotional and unnecessary, the GRA has distanced itself.

“In this regard the Authority wishes to state that the comments made by the Commissioner of the Customs Division, Col Kwadwo Damoah Rtd. at the Customs Management Retreat on Wednesday 10 August 2022 on the outcomes of the investigation were made in his personal capacity and do not convey the opinion of the Board and Management of GRA,” a release from the Authority signed by its Commissioner General Rev. Dr. Ammishaddai Owusu-Amoah has said.

Boos at Akufo-Addo: Someone failed and caused this monumenta...
19 minutes ago