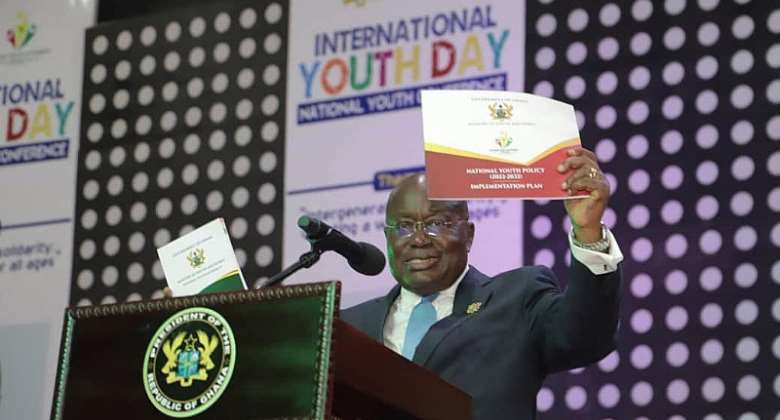 President Nana Addo Dankwa Akufo-Addo has launched the new National Youth Policy (NYP), which is expected to enhance the development of Ghana’s youth in the next 10 years.

The President said the new NYP was indicative of the government’s acceptance of a global shift in attitude toward youth policy-making.

The President, who launched the policy at Anagkazo, Akwapim-Mampong, said beyond the adoption of the policy, the month of August each year would be dedicated to issues of youth and youth advancement.

The President said as further proof of the government’s commitment to the welfare of young people, “I have decided to declare the month of August every year as the Youth Development Month, where pertinent issues concerning Ghana youth, would be brought to the fore for discussions and proffer solutions.”

Emphasizing the rationale behind the adoption of the new NYP, President Akufo-Addo, said the government’s understanding is that the solution to the myriad of challenges the youth face is not going to be made for the youth but in collaboration with the youth.

“The government was able to come to this understanding because of the impressive number of young minds who sit around the table where decisions on the affairs of this country are taken,” Akufo-Addo said.

“The national youth policy is thus in itself, an example of intergenerational solidarity and responds to the admonishing of the former United Nations Secretary General, Ban Kin Moon, that, when we give young people decent jobs, political weight, negotiating muscle and real influence in our world, they will create a brighter future,” the President added.

The NYP, according to the President, was carefully put together to reflect the goals set out in the United National’s 17 Sustainable Development Goals (SDGs). He thus indicated that all stakeholders in the country as far as youth development in the country is concerned, should make it their reference document.

“I am happy to note that all 17 SDGs were carefully considered and incorporated in this 2022 to 2032 National Youth Policy.

“The policy should therefore serve as the principal reference document for state institutions, private sector and foreign partners in their efforts to effect development for young people,” President Akufo-Addo said.

In 1999, in its resolution 54/120, the United Nations General Assembly (UNGA), endorsed the recommendation made by the World Conference of Ministers Responsible for Youth (Lisbon, 8-12 August 1998) that 12 August be declared International Youth Day.

The Assembly recommended that public information activities be organized to support the day to promote better awareness of the World Programme of Action for Youth, adopted by the General Assembly in 1995 (resolution 50/81).

International Youth Day is thus commemorated every year on 12 August. The Focal Point on Youth selects a theme for the day often with input from youth organizations and members of the UN Inter-Agency Network in Youth development.

It also organizes a virtual commemoration of the day. The Programme encourages youth globally to organize activities to raise awareness about the situation of youth in their country.

The National Youth Authority (NYA) in Ghana was established in 1974 by NRDC 241. It is thus, a Statutory Public Organization with the mandate to coordinate and facilitates youth empowerment activities in Ghana to ensure the development of the Ghanaian youth as a whole.

With the inception of constitutional rule in 1992, the Commission status reverted to the Council once more.

As a consequence to a statute law revision exercise under the laws of Ghana (Revised Edition) Act, 1998 (Act 562), the nomenclature of the Authority was changed to the current, National Youth Authority.