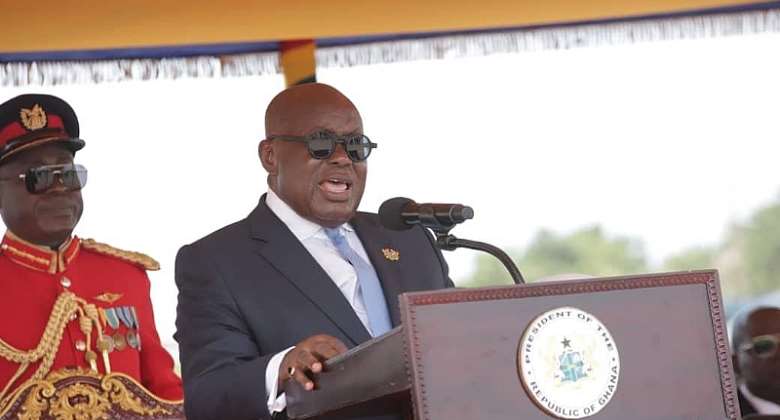 President Nana Addo Dankwa Akufo-Addo has reassured the government’s commitment to providing the Ghana Armed Forces (GAF) with the requisite resources and accoutrements to enable it to secure the territorial integrity of the nation, particularly, from terrorists’ activities.

Addressing the 2022 graduation parade of the Ghana Military Academy regular career course 61 at the Academy last Friday, President Akufo-Addo said the threats of terrorism are eminent but the strong partnership between the government and the GAF has kept the country safe.

"In view of the contemporary and emerging and future threats in our region," President Akufo-Addo said, "addressing security issues cannot be business as usual. The government has thus approved the expansion of the Ghana Armed Forces to cater for these threats."

The President said the strategic expansion and modernisation of the GAF with threat analysis and the acquisition of the requisite equipment, logistics, infrastructure development and increase in manpower, were being pursued vigorously.

"As part of efforts to enhance the operational capability, combat efficiency and logistical capacity of the Armed Forces, measures have been put in place in furtherance of restructuring and retooling."

President Akufo-Addo expressed the government’s determination to equip GAF to deal with the contemporary security threats of violent extremists and terrorist groups along the Northern borders of the country, as well as other internal security challenges.

As part of efforts to expand the GAF, President Akufo-Addo indicated that "additional bases, specialized units and brigades have been created with the acquisition of requisite equipment to enhance operations, particularly along our Northern frontiers.

"The construction and equipping of 15 Forward Operating Bases (FOBs) across our Northern frontiers for the Armed Forces for the Northern Boarder Project are on track.

The breakdown of the Regular Career Course 61 is 113 from the Army, 23 from the Navy, 20 from the Airforce and 5 Overseas Trained Cadets.

The Chief of the Air Staff award, presented to the Air Force Cadet who placed first in the order of merit of the Regular Career Course 61 (Air Force), went to F/CDT Amedimwole Elizabeth Ursula.

The Chief of the Naval Staff's Award - Sextant Award, given to the Midshipman adjudged the best in Naval warfare and Operations from the Regular Career Course 61 (Navy), went to JUO Aggrey Benedict Ekow Adjaye.

The Chief of the Army Staff's Award, awarded to the Army Cadet who placed first in the order of merit of the Regular Career Course 61 (Army), went to SUO Appiah - Hanson Emanuel.

The Sword of Honour, awarded to the best all-round Officer Cadet in the Regular Career Course, was bagged by SUO Appiah - Hanson Emanuel.